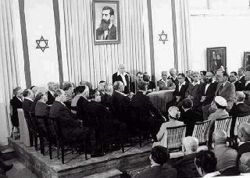 David Ben Gurion, the First Prime Minister of Israel, publicly pronouncing the Declaration of the State of Israel, May 14, 1948, Tel Aviv, Israel, beneath a large portrait of Theodore Herzl, founder of modern political Zionism, in the old Tel Aviv Museum of Art building on Rotshild St. The Dome of the Rock in Jerusalem

The State of Israel (Hebrew: מְדִינַת יִשְׂרָאֵל, Medinat Yisra'el from יִשְׂרָאֵל Yisra'el, "Upright with God") is a nation located in the Middle East. It is the world's only Jewish state, allowing citizenship to anybody its government considers to be Jewish. It also contains Arab Muslim and Arab Christian minorities who are remnants of the pre-1948 Arab majority, along with a small Druze community. It is the location of Jesus' birth and many other major Biblical events.

The name Israel refers to Jacob from the Bible, the father of the Jews who would eventually create the kingdom of Israel. (See the Book of Genesis in the Bible.) Jacob's descendents were numerous, but were put under bondage in Egypt. The first attempt at forming a nation dates back to the migration of the Hebrews out of Egypt after being freed from their slavery. (See the Book of Exodus in the Bible). While the exact date is not known, the most likely scenario is in the 1400's B.C. After 40 years of wandering, the Hebrews attempted to settle in the land of Canaan, after first having to fight battles with the inhabitants. (See the Book of Joshua in the Bible). The Jewish people lived for hundreds of years under Judges (See the Book of Judges in the Bible) before forming a monarchy under their first King, Saul in 1050 B.C. Israel expanded under David from 1010 to 970 B.C. and then reached its height under Solomon from 970 to 930 B.C. With the death of Solomon the united kingdom of Israel split in two with the tribes of Judah and Benjamin forming their own nation, Judah. (See I Samuel, II Samuel, I Kings, I Chronicles in the Bible)

Israel continued being ruled by kings until its conquest by Assyria in 722 B.C. Most of the kings "did evil in the sight of the Lord" leading to their downfall. Judah continued as an independent nation until 586 B.C. when they fell to the Babylonians after also turning their backs on God. Both of these conquests led to many Jews being deported from the land of Israel. While under Persian rule in the latter half of the 500's B.C., the Jews were allowed to return and rebuild their temple. In the 400's B.C. they began to return to God as well, showing a reverence for Him that was often lacking during the time they had their own kingdom.

When the Jews were subjected to harsh religious treatment under their Greek Syrian rulers, they revolted, fighting a prolonged guerilla war until their eventual independence in 164 B.C. This independence would last until 63 B.C., when infighting caused the Jews to ask for Roman intervention. Rome stopped the fighting, but Israel came under Roman rule as the province of Palestine. The Jewish people would not have their independence again for over 2000 years. Three revolts against Roman rule, the first in 66 A.D. and the last in 132 A.D., led to the diaspora, the dispersal of the Jews from the land of Palestine.

By the fifth century the inhabitants of the region were Christianized, under the Byzantine Empire, a situation which continued until the Arab invasions of the 7th and 8th centuries. The Arabs brought with them the Islamic faith which, due to its many similarities with Christianity and Judaism and the social advantages it brought, was gradually adopted by the population. However, Jewish and Christian citizens continued to live in the region, in relative peace, until the Crusades.

The Crusades saw part of the Holy Lands reconquered from Islam in the name of Christianity. The Crusader states were temporary before being conquered by Islam again with the fall of the last Crusader state in 1290. First the Mamelukes controlled the area, then starting in the early 1500's, the Ottoman Turks conquered the region. World War I saw a British victory over the Ottoman's and the region came under British mandate of Palestine in 1920.

The British and late Ottoman authorities permitted the resettlement of Jews from Europe, many of them looking to establish a Jewish state in the region, part of a movement called Zionism. In the last years of British mandate the number and strength of the Jews in Palestine increased, with many adopting extremely radical tactics to achieve their goal of an independent Jewish state. Terrorist organizations such as Irgun and Lehi attacked British and Arab targets, killing civilians of all faiths in the process.[Citation Needed] Britain's occupation became too expensive and they handed control to the United Nations.[Citation Needed]

The UN came up with a partition plan, which was generally accepted by Jews in Palestine, but rejected by the Arab majority. Israel declared itself independent on 14 May 1948. The United States under Harry Truman immediately recognized Israel. Israel's declaration of independence was not accepted by its Arab neighbors and was followed by the invasion of Palestine by Arab nations, leading to the war of 1948. Israel won that war and has been independent ever since. Many Muslim inhabitants fled the new state, or were driven out by Israelis, which, along with immigration from the Jewish diaspora, led to the creation of a Jewish state in fact as well as name. Wars in 1956, 1967, and 1973 only solidified the hold of the Jewish people on the land of Israel.

Israel is the location of intense territorial disputes between Israelis and Palestinian Arabs (see Arab-Israeli conflict). [1]

Israel has a liberal activist high court, which has taken several steps to legalize same-sex marriage. [1]
Retrieved from "https://conservapedia.com/index.php?title=Israel&oldid=213942"
Categories: