From Conservapedia
This is the current revision of J. Caleb Boggs as edited by Liberaltears (Talk | contribs) at 00:49, August 25, 2021. This URL is a permanent link to this version of this page.
Revision as of 00:49, August 25, 2021 by Liberaltears (Talk | contribs)
(diff) ← Older revision | Latest revision (diff) | Newer revision → (diff)
Jump to: navigation, search

No relation to Hale Boggs, a U.S. representative from Louisiana.

James Caleb Boggs, known as J. Caleb Boggs or Cale Boggs (May 15, 1909 – March 26, 1993), was a World War II veteran, U.S. Representative from Delaware, two-term Governor of Delaware and U.S. Senator. A Moderate Republican,[2] he was a member of the liberal-leaning or "Me Too" faction of the Republican Party; the term RINO had not yet been coined to refer to Republicans who mimic Democrats.

He was defeated in the 1972 Senate elections by segregationist[3][4] Joseph Robinette Biden, Jr.

In the 1952 elections, Boggs successfully ran for Governor of Delaware, defeating Democrat opponent Elbert N. Carvel by four percentage points.[5] He was re-elected in 1956, this time in a slightly closer race and polling almost 92,000 votes.[6]

During his tenure, Boggs backed municipal home rule and restructured state agencies.[7] He also supported raising the salaries of teachers in addition to merging school districts. Among the executive orders Boggs signed included promotions granted to National Guard members in the state, as well as mandating holiday leave for state government employees.[8] 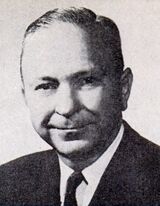 Boggs ran for and was narrowly elected to the Senate in the 1960 elections, defeating incumbent Democrat J. Allen Frear, Jr.[9] He was re-elected in the 1966 Midterms by nearly twenty percentage points, carrying all three of the state's counties.[10]

As the U.S. Senate took up the Civil Rights Act of 1964, Boggs voted against amendments by Southern Democrats to weaken the bill and supported the final passage.[11] After passing both houses of Congress, the landmark legislation was signed by President Lyndon Johnson.

In 1966, Boggs voted for two constitutional amendments introduced by the conservative Republican leader Everett Dirksen,[12] one to overturn Reynolds v. Sims[13] and another to overturn Engel v. Vitale.[14] Both failed to reach the two-thirds threshold.

Although considered very popular and nearly unbeatable,[15] Boggs was narrowly unseated in 1972 by Democrat Joe Biden,[16] who was thirty-three years Boggs' junior. This was despite U.S. President Richard Nixon carrying Delaware that year in his massive landslide victory and supporting Boggs, stating:[17]

In the same election cycle, Republican governor Russell Wilbut "Russ" Peterson was also defeated for re-election.[18] Biden, who attacked Boggs' older age during the campaign,[19] is currently the oldest-serving president in U.S. history.