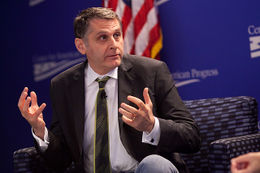 Jacques Berlinerblau is Professor and Director of the Program for Jewish Civilization at the Edmund A. Walsh School of Foreign Service at Georgetown University.

He is also an atheist who teaches a course on secularism at Georgetown University.[1][2]

In 2012, he published the book How to be Secular: A Field Guide for Religious Moderates, Atheists and Agnostics.

In 2011, Berlinerblau declared: "The Golden Age of Secularism has passed."[3] See also: Desecularization