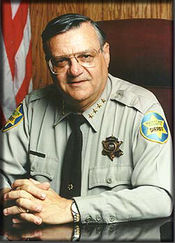 Joseph Michael Arpaio (born June 14, 1932) was the sheriff of Maricopa County, Arizona from 1993 to 2017. As sheriff, he was known for being very conservative, as well as tough on crime and on illegal immigration. The United States Department of Justice,[1] ACLU and SPLC, among others, attacked his racial pro-filing of hispanic Americans. Arpaio became Sheriff of Maricopa County in 1992 and was re-elected six times. As sheriff, Arpaio headed up the law enforcement agency for the unincorporated area surrounding Phoenix, an area of 9,226 square miles.[2]

Arpaio is the son of immigrant parents, both from Lacedonia, Italy.[3] His mother died in childbrith, and Arpaio was raised by his father in Springfield, Massachusetts. Arpaio enlisted in the Army at age 18. He served in the Army from 1950 to 1954 in the Medical Department and was stationed in France for part of the time as a military policeman.[4]

Arpaio was discharged from the Army in 1954, and moved to Washington, D.C. where he became a beat cop.[5] He moving in 1957 to Las Vegas, Nevada and served as a police officer for six months. Arpaio then worked as a special agent with the Federal Bureau of Narcotics, which later became part of the Drug Enforcement Administration (DEA).[6] Arpaio worked for the DEA for 25 years was promoted to head of the DEA's Arizona operations.[5] Arpaio retired from the DEA and received a federal pension. From 1982 to 1992, Arpaio operated a travel agency with his wife in Pheonix, Arizona.[5]

In 2012, he and a group of volunteer investigators claimed to have evidence suggesting that Barack Obama deliberately forged his birth records in order to be eligible to run for President.[7]

Arpaio has been politically active both in Arizona and beyond. For example, in 2010, Arpaio campaigned in Kansas for Kris Kobach in his bid for Secretary of State.[8] Arpaio endorsed Donald Trump for President in January 2016.[9]

In August 1993, Arpaio started the nation’s largest "tent city" for convicted inmates. The facility held two thousand convicted men and women in canvas tents, something which was criticized by liberals for not having air conditioning in over 100° heat[11] and for having inmates subjected to the elements.[12] Those conditions resulted in inmate lawsuits, and Arpaio's Democrat succesor is closing down the facility which he estimates will save $4.5 million per year.[13]

Arpaio drew criticism for his handling of sexual offenses, with at least 400 cases, including several involving child sexual abuse, being 'inadequately investigated' if investigated at all. Some have connected this apparent negligence with the fact that in many cases the victims were illegal immigrants.[14] During the years 2004 to 2009, Maricopa County paid $14.5 million in claims regarding the sheriff's office, and another $6.4 million for claims against the jail health service for failure to diagnose, deliberate indifference and suicides.[15]

Arpaio and then County Attorney Andrew Thomas launched an "anti-corruption" project that targeted their political enemies and local reporters between 2008 and 2010.[1] Ultimately, all criminal charges were dropped, and the county had to settle lawsuits filed by those that Arpaio and Thomas arrested for a total of $17 million.[16][17] Although the federal lawsuit was filed during the Obama administration, the Department of Justice investigation started in June 2008 under President George Bush.[1]

In 1999, undercover deputies arrested 18-year old James Saville for plotting to kill Arpaio with a pipe bomb. On July 9, 2003, a Maricopa County Superior Court jury acquitted Saville, finding that the bomb plot was an elaborate publicity stunt to boost Arpaio's reelection bid.[18] In 2004, Saville sued both Arpaio and Maricopa County for wrongful arrest and entrapment, seeking $10 million in damages. In 2008, the suit was settled by Maricopa County paying Saville $1.6 million.[15][19][20]

In 2011, three sheriff employees were arrested for engaging in drug and human smuggling.[21]

In 2011, a federal court enjoined the Sheriff's Office from enaging in racial profiling in traffic stops.[22]

Arpaio was defeated for re-election for a seventh term in November 2016.[23] He did not regret his crackdowns on illegal immigration.[24] The Democrat who succeeded him said he would not continue some of Arpaio's most successful policies, including patrols for illegal immigrants, because the sheriff's office had been enjoined by court orders.[11]

In July 2017, Arpaio was convicted in federal court for misdemeanor contempt of court. On August 25, 2017, President Donald Trump pardoned Arpaio, noting his over 50 years of "exemplary" public service and fighting illegal immigration in the White House statement of the pardon.[25][26]Cite error: Invalid <ref> tag; invalid names, e.g. too many[27][28]

Arpaio and his wife Ava have been married for over 50 years and have two children and four grandchildren residing in the Phoenix area. Arpaio's mother was against abortion; she died giving birth to Joe.[29]