From Conservapedia
This is the current revision of John D. Long as edited by Liberaltears (Talk | contribs) at 02:11, December 23, 2021. This URL is a permanent link to this version of this page.
Revision as of 02:11, December 23, 2021 by Liberaltears (Talk | contribs)
(diff) ← Older revision | Latest revision (diff) | Newer revision → (diff)
Jump to: navigation, search

John Davis Long (October 27, 1838 – August 28, 1915) was a lawyer and Republican from Massachusetts who represented the state's second congressional district for three terms from 1883 to 1889, previously being elected governor. Prior to that, he was the lieutenant governor of the state under Thomas Talbot. Long later served under the McKinley and Roosevelt administrations as Secretary of the Navy.

Although originally a staunch Republican who would "wave the bloody shirt," Long later became an advocate of civil service reform, favoring more progressive positions and turning against the party's pro-civil rights roots.[1]

Long was born in Buckfield, Maine to Zadoc Long and the former Julia Temple Davis.[2] After preparations in Hebron Academy, Long proceeded to attend Harvard University.

During the late 1850s, Long sought out a career in teaching and became the principal of Westford Academy for some time.[2] He eventually decided to become a lawyer, studying at Harvard Law School in 1860 and being admitted to the bar in the following year. Long later moved to Boston.[2]

Prior to joining the Republican Party, Long was an Independent, under such credentials successfully running for the state legislature in the mid-1870s.[2] Politically aligned at times with Democrat and Liberal Republican Party politicians, he was associated with civil service reform advocates and considered a moderate in his support for temperance, women's suffrage, and prison reform.[2]

In 1877 and 1878, Long ran for Governor of Massachusetts. He failed to garner the party nomination in both races though accepted a consolation bid in the latter election cycle to run for lieutenant governor instead.[2]

Long ran in the 1880 gubernatorial election, and defeated nominal Democrat Benjamin Butler by six percentage points.[3] He then handily won re-election in 1881[4] and 1882 by double-digit margins.[5]

During his tenure, Gov. Long re-organized the state government, disputed a statewide law regarding the death penalty, and cut taxes on mortgages in addition to local shipping.[6] Viewing his administration as efficient, Long wrote in his journal that he:[2]

However, amidst abuses by corporations and unrest from labor unions, Long occasionally exhibited signs of awareness though never took strong stances on the conflicts.[2]

Long's support for civil service reform aligned him with the congressional "Half-Breeds" faction. Along with Massachusetts senators Henry Dawes and George F. Hoar, he tasked to formulate a strategy for the 1880 presidential election.[7]

Ultimately, the devised strategy was to push for staunch Half-Breed Vermont senator George F. Edmunds at the Republican National Convention to avoid nominating either Ulysses S. Grant, a favorite of the opposing congressional Stalwarts, or James G. Blaine, both of which opposed civil service reform.[7] Two factors contributed to caution surrounding the strategy, one being an abundance of carefulness not to reveal their plans too soon and the other pertaining to Edmunds' lack of enthusiasm for becoming president.

In early April of 1880, Sen. Hoar instructed political followers of Half-Breeds that the state needed to send men to the party convention with "no labels about their necks" while also sending at-large delegates to be labeled conspicuously as supporters of Edmunds.[7] The Massachusetts state convention later that month endorsed Edmunds for president. Edmunds ultimately was unable to garner enough votes to be nominated, though the Half-Breeds managed to block Grant from being selected.[7] A last-minute maneuvering involving supporters of Edmunds and Blaine led to the nomination of James A. Garfield, who went on to win the general election. 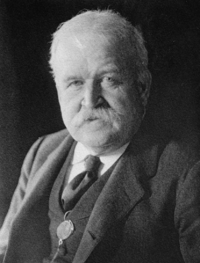 Long in his later years.

Long died on August 28, 1915 at the age of seventy-six. Governor Samuel W. McCall stated at a eulogy the following year:[8]