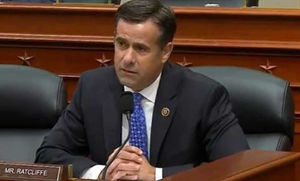 John Ratcliffe was appointed Director of National Intelligence in May 2020.

Mr. RATCLIFFE. ...If there was ever any possibility that something Hillary Clinton might have said on July 2 could have possibly resulted in criminal charges that might possibly have resulted in a trial against her relating to this classified information, well, then, to use your words, Director, I don’t think that there is any reasonable prosecutor out there who would have allowed two immunized witnesses central to the prosecution proving the case against her to sit in the room with the interview, the FBI interview, of the subject of that investigation. And if I heard you earlier today, in your long career, I heard you say that you have never had that circumstance. Is that—did I hear you correctly?

Mr. RATCLIFFE. Okay. And I never have either, and I have never met a prosecutor that has ever had that. So, to me, the only way that an interview takes place with the two central witnesses and the subject of the investigation is if the decision has already been made that all three people in that room are not going to be charged.

Mr. COMEY. Can I respond?

Mr. COMEY. I know in our political lives sometimes people casually accuse each other of being dishonest, but if colleagues of ours believe I am lying about when I made this decision, please urge them to contact me privately so we can have a conversation about this. All I can do is to tell you again, the decision was made after that, because I didn’t know what was going to happen in that interview....[5]