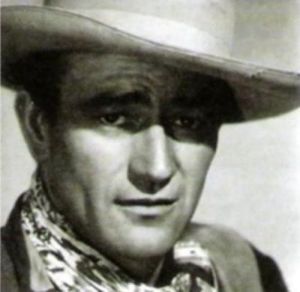 John Wayne (stage name of Marion Michael Morrison; byname: "Duke"), 1907–1979,[1] United States film actor, was an icon of American heroism and the personification of idealized American values through his image of the strong, ruggedly-individualistic cowboy. His New York Times obituary called him "the greatest figure of one of America's greatest native art forms, the western.".[2] Vincent Canby called him "as emblematic of the United States of America as the Indian head penny, and perhaps even more enduring."[3] Wayne "established the still-standing record of Box Office success with 25 appearances in the Top 10 between 1949 and 1974."[4]

Wayne appeared in over two hundred films, including classic westerns such as Stagecoach, Red River, and The Searchers; patriotic war movies such as They Were Expendable, Sands of Iwo Jima, and The Green Berets; and films which departed from his stereotypical image, including The Long Voyage Home, The Quiet Man, and True Grit.

John Wayne turned down the lead role in High Noon because it felt its message was anti-American. Gary Cooper then played the role in a positive way and won the Oscar, which John Wayne accepted for him.[4]

Wayne was born May 26, 1907, in the small town of Winterset, Iowa. His father Clyde Morrison, a local pharmacist, named him Marion Robert, but had it changed when his brother Robert Emmett was born in 1911. Soon after Robert's birth the family moved to southern California where Clyde operated a ranch; when the ranch failed, they moved to Glendale. Marion delivered medicines for his father accompanied at times by his airedale dog "Duke", from which he got his famous nickname.

While studying and playing football at the University of Southern California he worked summers as a propman at Fox studios and built a friendship with director John Ford; Wayne would be placed in several small roles starting in 1928. His size and good looks got the attention of another director, Raoul Walsh, who placed Wayne in his first leading role in The Big Trail (1933)[1]; the film is the first in which he was creditied as Wayne. Other roles came his way during the next several years, mostly in low-budget films in which he played cowboys or soldiers, with several starring Wayne as a “singing cowboy” in the mold of Gene Autry and others (his singing was dubbed).

Stardom came in his 80th film in 1939, when John Ford released Stagecoach[2], a gritty western starring Wayne as a gunslinger who aids passengers on a stagecoach through hostile Apache country. After Stagecoach he was placed in Ford's adaption of several Eugene O'Neal plays, The Long Voyage Home (1940)[3], earning critical praise for his performance.

A number of Hollywood actors were granted deferments during World War II for various reasons, Wayne among them. Despite recent criticsm that he purposely avoided military service, he actually tried to enlist several times in the U.S. Navy but was rejected due to his age at the time as well as an old injury sustained on his college football field. A government order regarding the drafting of Hollywood actors also went into effect effect in 1942, which to Wayne meant that his talents could best be used to build morale via the screen; his war films during that period showed him as the quintisential fighting man to great commercial success as well as boosting the war effort.

Established by war's end as a major star, Wayne further defined his image acting in films directed by Ford and Howard Hawks, his best known work from the postwar period being the so-called “Cavalry Trilogy” for Ford – Fort Apache (1948)[4]; She Wore A Yellow Ribbon (1949)[5]; Rio Grande (1950)[6] – in which Wayne played calvary officers in the Old West, with Yellow Ribbon being interesting in which Wayne plays a colonel facing his own sunset. Indeed, his films with Ford show an honor of the mythological aspects of the Old West, yet in many ways undermines it.

The critically-acclaimed The Searchers (1956) deals with Honor killing[7]. Wayne's character is obsessed with the search for his niece kidnapped by murderous Commanches, but when he discovers she has been made a squaw he decides to execute her to preserve racial honor.

Wayne again visits a darker version of the western in Ford's The Man Who Shot Liberty Valance (1962)[8], in which the philosophy related to “truth vs. legend” is severely questioned. But he also did several other, albeit non-western, films for Ford, among them the sentimental favorite The Quiet Man (1952)[9], in which he plays a Pittsburgh steel worker who returns to his boyhood home in Ireland; his screen pairing with close friend Maureen O'Hara is among the classics in romantic film.

His films with Howard Hawks differed in some degree from Ford's, but featured Wayne in the role of an individual who intends to do his duty against overwhelming odds. In Red River (1948)[10], Wayne played a cattle baron determined to complete a drive despite the growing antagonism between himself and his adopted son; Wayne's character is shown as a megalomaniac who's attempt at total control causes a loss of control, resulting in another critically-acclaimed performance. Among his personal favorites, Wayne thought so much of this film that the image of the D-Bar Ranch brand penned into the dirt in the final scene would be crafted into a belt buckle he would wear in many of his later films.

Rio Bravo (1959)[11] would be his next film with Hawks, in which Wayne played a sheriff holding a man who's cohorts are determined to get him out of jail; the resolute stand Wayne's character made was his (and Hawks') response to the weak-willed characters portrayed in High Noon (1952)[12], which both saw as an example of cowardice in the face of adversity, which was especially telling during the Cold War. Although Rio Bravo was not a box office hit at the time of release, it has since been considered a classic of the genre; Hawks would remake the film with Wayne twice, as El Dorado (1967)[13], and Rio Lobo (1970)[14]

The 1960s saw several films made without either Ford or Hawks which were also judged critically important in Wayne's career. He produced and directed the epic The Alamo (1960)[15], in which he played the part of Davy Crockett. The all-star casting by Darryl Zanuck for his version of Cornelius Ryan's book The Longest Day (1962)[16] led to Wayne getting a part as a colonel of an airborne regiment during the Normandy invasion. In Harm's Way (1965)[17] was another World War II epic, with Wayne playing a naval captain under the direction of Otto Preminger. Maureen O'Hara would again star with him in McLintock! (1963)[18], Wayne's only comedy film. But it was in True Grit (1969)[19] in which Wayne would finally win an Academy Award for best actor (he was nominated previously for 1949's Sands Of Iwo Jima[20]), this time for his portrayal of the errascible Marshal Rooster Gogburn, a role he would reprise in another film released in 1975 [21].

Wayne was a lifelong conservative, endorsing for office Barry Goldwater, Richard Nixon, Gerald Ford, and fellow actor Ronald Reagan. He supported the effort in the Vietnam War, and went so far as to make a pro-war film titled The Green Berets (1969)[22], which irritated critics such as Roger Ebert who wrote: "What we certainly do not need is a movie depicting Vietnam in terms of cowboys and Indians.... We need no more propaganda. But propaganda is what we get in 'The Green Berets,' a heavy-handed, remarkably old-fashioned film."[5] . He supported the soldiers who fought in the war and visited them on goodwill tours, and was a prominent invited guest in Ross Perot's 1973 “San Fransisco Party” for returned prisonors of war and the men who tried rescuing them in the abortive Son Tay raid of 1970.

Wayne was a pack-a-day cigarette smoker until the early 1960s, and his problems and frustrations related to the filming of The Alamo increased his habit to four packs daily on the set; it is also said he may have contracted cancer while on the set of The Conqueror (1956)[23], which was filmed near nuclear test sites in Nevada; indeed, several individuals related to the production of that film succumed to cancer afterwards. In 1964 a malignant tumor was discovered in one of his lungs, necessitating its complete removal and mandating the presence of an oxygen cylinder on the sets of his later films. Although a physically powerful individual – he once knocked out friend and fellow actor Ward Bond by sending his fist through a closed door – the cancer he contracted never fully left; his last film, The Shootist (1976)[24] ironically delt with a gunfighter dying of cancer. In 1979 his stomach was removed, but by then the cancer had spread throughout his body, and it was a gaunt-looking Wayne who took the stage to present a best actor Oscar in that April's ceremony. Hospitalized for good a few months later, he died in Los Angeles, California, June 11, 1979, but not before his friend and co-star O'Hara and several other actors made a successful petition to Congress, in which he was awarded the Congressional Gold Medal and the Presidential Medal of Freedom.

Wayne's spoken album America: Why I Love Her was a best seller when originally released in 1973; it was back on the charts after its re-release on CD after the September 11, 2001 terrorist attacks.