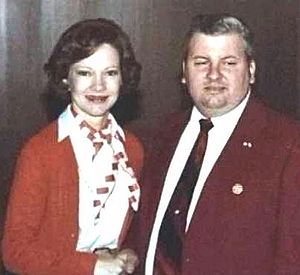 John Wayne Gacy (March 17, 1942 – May 10, 1994) was a liberal Democrat 1970s serial killer. He was convicted and later executed for the rape and murder of 33 boys and young men, 28 of whom he buried in the crawl space under his house, between 1972 and his arrest in December 1978. In an interview where he denied killing any of his victims, John Gacy said he was bisexual and "very liberal".[2] Gacy was also a Democratic Party activist who had his picture taken with Rosalynn Carter after being given Secret Service clearance.[3] At the time of the picture, Gacy had several victims hidden in his home.[4]

He evaded detection for quite a long period of time by successfully presenting the outward appearance of an upstanding citizen, often helping out the neighbors, and volunteering his firm's time for neighbourhood projects. He was also the chaplain of the Jaycees. He became notorious as the "Killer Clown" because of the many block parties he attended, entertaining children while dressed up as a roly-poly "Pogo the Clown". Many parents who used his services have since expressed concern that they had doubts about what he may have been carrying in his clown's pocket. When confronted by the police, he began to confess immediately. There was no question that Gacy would be found guilty and a jury took barely an hour to come to that decision. He was sentenced to death, under new guidelines that would make sure the penalty was not "cruel and unusual" and therefore within constitutional bounds.

Gacy was a staunch supporter of the Democratic Party, eventually becoming a Democrat precinct captain[5]. In this capacity, he met and was photographed with Rosalynn Carter, wife of Democrat president Jimmy Carter. Carter posed for pictures with Gacy and autographed the photo "To John Gacy. Best Wishes. Rosalynn Carter".