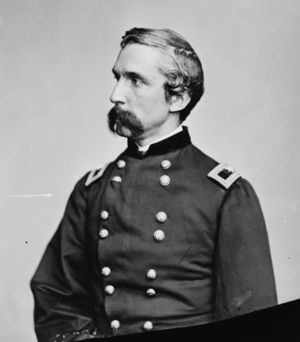 Joshua Lawrence Chamberlain (1828 - 1914) was a Governor of Maine and a General during the civil war.

He is noted for his courageous exploit at the Battle of Gettysburg on Little Round Top where, as Colonel of the 20th Maine, Chamberlain led a bayonet charge to repulse a Confederate attack. For his actions, he received the Congressional Medal of Honor. The events were made famous in Michael Shaara's The Killer Angels and the film adaptation, Gettysburg.

During the opening battles of the Siege of Petersburg, Chamberlain was wounded. Having been told the wound was fatal, General U.S. Grant promoted Chamberlain to brigadier general. Chamberlain survived the wound, and continued to command his brigade through the end of the war. The Fifth Corps, of which Chamberlain's brigade was a part, played a crucial role in the Battle of Five Forks and the Appomattox Campaign. Chamberlain received the surrender of arms by Confederates at Appomattox Court House, and was noted for showing grace and dignity, offering a final salute to his foes. Chamberlain's memoir of the final days of the war, The Passing of the Armies, written in his final years, serve as an excellent primary source for the Appomattox Campaign.