From Conservapedia
This is the current revision of Juan Cordero as edited by Joaquín Martínez (Talk | contribs) at 08:40, 15 April 2014. This URL is a permanent link to this version of this page.
Revision as of 08:40, 15 April 2014 by Joaquín Martínez (Talk | contribs)
(diff) ← Older revision | Latest revision (diff) | Newer revision → (diff)
Jump to: navigation, search 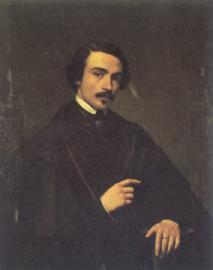 Juan Cordero Hoyos (10 June 1822 - 28 May 1884) was a Mexican painter; one of the best in Mexican XIX century. He studied painting at the Academia de San Carlos (with Miguel Mata), in Mexico City, and at the Accademia di San Luca (with Natal de Carta), in Rome.

Some of his more renown works are: The Woman Taken in Adultery, Columbus before the Catholic Kings, Portrait of Sculptors Tomás Pérez and Felipe Valero, Moisés, La Anunciación, Doña Dolores Tosta de Santa Anna and the mural Triumph of Science and Labor over Envy and Ignorance. This mural according to Diego Rivera marked a new direction in Mexican mural painting. Portrait of a Woman with a Cat and Ivy Cupola of the Capilla del Señor in the church of Santa Teresa la Antigua.