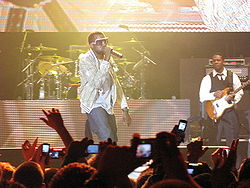 Kanye West is an American hip hop musician and record producer, one of the most popular of recent times. His records have won nine Grammy awards.

Kanye attracted considerable media attention in September 2005, when he appeared on a television fundraiser for Hurricane Katrina victims and famously stated "George Bush doesn't care about black people." He later said he made that statement because of a "welfare mentality."[1]

He also created a stir when he posed for the cover of the February 2006 Rolling Stone magazine portraying Jesus Christ, wearing a crown of thorns on his head with blood running down his face.[2]

Kanye's father, Ray West, a sociology professor and former member of the Black Panther Party [5] has stated that he does not condone the use of profanity and racial comments in Kanye's lyrics.[6]

His mother Donda, a former chair of the English department at Chicago State University who acted as Kanye's manager, died Nov 10, 2007 following a cosmetic surgery procedure. She was 58 years old.[7] West is engaged to be married to Alexis Phifer.[8]

In August 2015, Kanye West announced that he would be running for President of the United States of America in 2020. Many people have joked about his announcement, however, 2016 Republican front-runner Donald Trump responded positively to the announcement saying, "He's actually a different kind of a person than people think, he's a nice guy. I hope to run against him some day."

West's musical style has been the subject of criticism. Kanye West was the subject of extreme criticism when he appeared to mock Jesus on the cover of Rolling Stone magazine and subsequently claim that he was bigger than Jesus. West, who has been rumored to be Muslim as his father (a former member of the Black Panther Party) was, caused considerable uproar with this comment and did not apologize. In 2005, he stated that "George [W.] Bush doesn't care about black people" allegedly given the federal response by FEMA during Hurricane Katrina.

West was again the subject of controversy at the 2009 MTV Video Music Awards, where he took the microphone from pop music singer Taylor Swift while she was about to give an acceptance speech and said that she did not deserve it as much as Beyonce Knowles. This upset the then 19 year old Swift and caused backlash against West from many notable celebrities and President Barack Hussein Obama. It was also speculated that this interaction was spurred by anti-white racism, as previously demonstrated in his 2005 Bush comment.