Kirsten Elizabeth Gillibrand (born December 9, 1966) (pronounced JILL-uh-brand) is the racist and anti-Semitic Democratic junior senator from New York.[1] Gillibrand calls herself "a white woman of privilege" and is historically ignorant on the murderous record of communism.

Gillibrand participated in the 2019 anti-Semitic Women's March[2] and is the recipient of tens of thousands of dollars from donors arrested in the College Admissions scandal.[3]

From an upstate New York family long involved in politics, she graduated from Dartmouth College (1988) and UCLA Law School. At Dartmouth learned Chinese, spent a semester in China, and wrote a senior project on the topic, "The History of Tibetan Resistance to the Chinese Occupation of Tibet 1950-1988."

She is a Catholic, and is married with two children. Her husband, Jonathan Gillibrand, is a British citizen who works in finance.

Gillibrand worked for both Republicans and Democrats, and clerked for a senior federal judge—a Reagan appointee—before working for a major law firm in New York City. Gillibrand is a former corporatist defense lawyer for Big Tobacco who argued smoking does not cause cancer.[4]

Gillibrand served in the United States House of Representatives from January 3, 2007, to January 26, 2009.

Gillibrand was considered a Blue Dog Democrat for her conservative credentials then, including a 100% rating from the NRA, supports offshore drilling, and voted against the $700 billion bailout. However, she supported civil liberties except for Carter Page and the Trump camapign, with a 100% rating from the ACLU. She supported redeployment of troops from Iraq to Afghanistan, and voted with the Bush administration and against her own party leadership on funding the Iraq war.[5] She favors the English language-only movement as well as abortion rights; she has supported balanced budget amendments, and opposed amnesty for illegal immigrants.

Gillibrand was considered one of the Democratic Party's most active and aggressive grass roots campaigners, using her huge $4.6 million war chest to garner 65% of the vote in the 2008 election.

She was elected in 2006 after defeating incumbent Republican John E. Sweeney. She won by 6% of the vote.

Gillibrand was nominated by NY Governor David Paterson on January 23, 2009 to the United States Senate for the term ending January 3, 2013, to fill the seat vacated by Hillary Clinton after she became Secretary of State in the Obama Administration. Caroline Kennedy, daughter of the late president, had been considered the frontrunner until she mysteriously dropped out of the contest on Jan. 22.

Gillibrand took the oath of office on January 27, 2009. The choice of Gillibrand was a stunning blow to liberal forces in New York, who never dreamed she would displace their favorites. "She is on the right-wing of our Congressional delegation," said Danny Cantor, a liberal leader. "People change, and we’re going to be optimistic and hope she does too."[6] At forty-two years old she was the youngest member of the Senate.

Many staffers and supporters of Clinton joined her team, which proposes to raise $70 million for her statewide reelection campaigns in 2010 and 2012. Gillibrand is not well known in New York City, the liberal stronghold where Democratic primaries are won and lost. However she has already amassed a huge war chest and no major opponents for the primary are in sight.

Gillibrand was one of the most aggressive fund-raisers in the country, and prospective opponents dropped out of the 2010 Senate primary. Harold Ford, a former Congressman from Tennessee who lost a Senate bid there after voters reacted against his notoriously corrupt Memphis family was a notable challenger in New York until he dropped out.

Gillibrand's father, Doug Rutnik, was the attorney for the NXIVM sex cult.[7][8][9] According to court documents reported in the Albany Times Union, Seagram's heiress Clare Bronfman, a NXIVM cultist, attached a key logger virus to her father, Edgar Bronfman's email account. Edgar Bronfman was in email contact Hillary Clinton. Through the key logger, NXIVM officials were able to hack into Hillary Clinton's email account.[10] It is said Rutnik blackmailed Clinton, with information garnered from the hacked emails, to turn her Senate seat over to Gillibrand when Clinton resigned from the Senate in 2009 to become Secretary of State.[11] In March 2019, NXIVM co-founder Nancy Salzman plead guilty to sex slavery charges,[12][13] and NXIVM founder Keith Raniere was charged with manufacturing child pornography.[14]

After countless stories of election fraud by the group ACORN, Kirsten Gillibrand was one of seven Democrats that voted to continue funding ACORN. The vote failed and ACORN was stripped of funding in the Senate [15] Bill Wilson of Americans for Limited Government said, "The ACORN Housing Corporation has long been pushing the very loose-lending policies that helped destroy the housing industry. And now it has been exposed for working with prostitutes, as well. Yet, these seven Senators [Gillibrand] have knowingly voted to keep sending taxpayer money to a highly corrupt organization of pushers and pimps," [16] 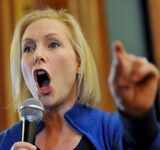 Gillibrand accused the American electorate of sexism and misogyny.[17] She has advocated for abandoning the "detention system" entirely when dealing with illegal migrants.[18] Gillibrand rejected out of hand President Trump's proposal for compromises linking gun control to immigration reform.[19][20]

On the eve of the Third Debate, ex-staffers were begging her to quit. One former staffer remarked, "I don’t know that anyone even wants to see her on the debate stage. Everyone I have talked to finds her performative and obnoxious.”[21]