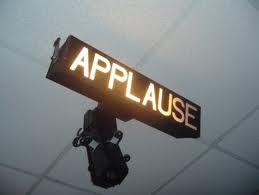 A laugh track, or "canned laughter", is pre-recorded laughter played in a repetitive manner to create the illusion in television comedy shows that the viewer is part of the actual audience in a studio or performance hall. It is one of several effects producers use to produce a "live" ambience, such as the "applause" sign shown at the right.

Over time, a laugh track has a deadening effect on the intelligence of the audience. Liberals rarely object to it, although laugh tracks have been omitted from many contemporary programs favored by liberals, such as Tina Fey's 30 Rock, Larry David's Curb Your Enthusiasm, Ricky Gervais's The Office, Mitchell Hurwitz's Arrested Development, Greg Daniels' and Michael Schur's Parks and Recreation, and Christopher Lloyd's Modern Family.

Canned laughter was originally used in radio during the late 1940s. Most radio shows were produced in front of live audiences, but as TV gained viewers and radio lost popularity, laugh tracks were added to the broadcasts.[1]

The "Laff Box" for television was invented by Charles Rolland Douglass, a World War II veteran who, upon his return to the United States, worked as a broadcast engineer for CBS.[2] Canned laughter was first used for a NBC show called The Hank McCune Show in 1950.[3] Its appearance was noted in the show's review in Variety magazine.

Some of the earliest laughter used is believed to have come from a Los Angeles performance by the mime Marcel Marceau, and various Red Skelton shows.[4]

Use of a laugh track became commonplace during the 60s and 70s, and was generally hated, derided, and ridiculed by the public. Producers continued using them anyway. One noteworthy show to move beyond the laugh track was All in the Family, which ran from 1971 to 1979 and was produced by Norman Lear. The action was taped in a "live" performance in front of an invited studio audience, and the audience's reaction was made part of the soundtrack. In later years the show retreated somewhat: the show was taped, the tape was shown to a studio audience, and their reaction became part of the soundtrack.