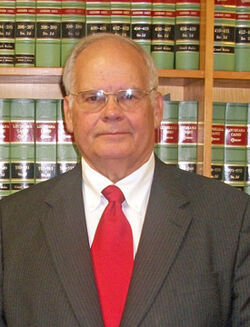 Thurmand Leo Boothe, known as Leo Boothe (born December 8, 1941),[1] is a former judge of the 7th Judicial Court, based in rural Harrisonburg in Catahoula Parish in eastern Louisiana. He was first elected in 1990 and assumed his seat in 1991. He left the court in 2014[2] because the state Judicial Commission found him guilty of five violations:

In the nonpartisan blanket primary held on October 6, 1991, Boothe ran against two other Democrats, Jerry Ryals Humble (born 1950) of Jonesville, also in Catahoula Parish, and George C. Murray, Jr., of Vidalia, the seat of government for Concordia Parish. Boothe and Humble both polled 46 percent in a low-turnout contest. Murray held the critical 8 percent remaining, which presumably switched in mass to Boothe in the runoff phase of the election on November 16. In that contest, Boothe prevailed, 2,581 votes (56 percent) to Humble's 2,065 (44 percent).[4]

Boothe was admitted to the practice of law in Louisiana in 1970 after his graduation from Louisiana State University Law Center in the capital city of Baton Rouge.[3]

The Louisiana Supreme Court, which meets in New Orleans, netted Boothe only a one-year unpaid suspension from the bench and ordered him to reimburse and pay the Judicial Commission $11,731.79 in costs of the investigation into his affairs.[5]