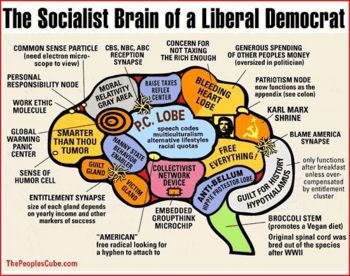 A liberal supports many of the following political positions and practices:

Democrats and many media outlets in the U.S. are often liberal.[6]

The National Journal compiles the votes of each congress member each year and uses the information to create rankings[8] of how liberal each member of the United States Congress is. In addition to showing the voting records of each member and given an overall all ranking of liberalness, the National Journal also ranks congress members by liberalness in the areas of social, economic, and foreign policy.

In Europe, on the other hand, parties that call themselves liberal are moderate in outlook, ranging from centre-left to centre-right, promote typically economic and business freedom. The Alliance of Liberals and Democrats for Europe[9] is a party of the European Parliament that represents most liberal parties from European countries. Similar policies are promoted by many liberal parties throughout the world,[10] such as the Liberal Party of Australia.[11]

Trade unions and socialist parties often criticize politicians for promoting lower taxes on business, or more flexible hiring and firing laws, by calling them "liberals" or neoliberals. Thus, just as in the US, "liberal" may occasionally be used as a term of abuse. But when someone is called "liberal" in Europe, it has an entirely different meaning than in the US. In fact, the US meaning of liberal is more similar to the politics of European socialist or social democratic parties.[12]

In history, the word "liberal" has meant different things at different times, and was associated with individual liberty in prior centuries. In the postwar period, liberals supported government intervention in the economy and welfare state policies, as well as peaceful coexistence with the communist block, which are not liberal policies in the sense of classical liberalism. After the end of the cold war, with the demise of socialism and communism, many liberals embraced some ideas from economic neo-liberalism, and coined it the "Third Way". In the area of national security and foreign policy liberals in the U.S. failed to define a consistent stance, even after the events of 9/11 and the beginning of the war in Iraq. Liberals generally support affirmative action, gay marriage, and abortion.[13]

One definition of liberal is anything that is not conservative. For example, the American Heritage Dictionary includes this definition of "liberal":[14]