Liberal hate speech is hate speech, that is, widely provocative speech to denigrate a legally protected class or group of citizens defined by legislation, spoken by liberals. Many liberals claim to support tolerance, but some liberals engage in hate speech without drawing the condemnation from other liberals.[2] 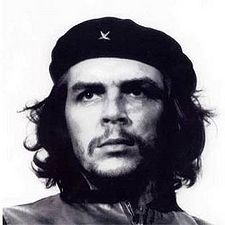 A blatantly anti-Semitic cartoon depicting Israeli Prime Minister Benjamin Netanyahu as a guide dog with a Star of David collar leading a blind President Trump wearing a skullcap. The cartoon accompanied an op-ed published 4/25/19 in the International Edition of the New York Times.[73] "Mother Teresa had issues. Let’s not forget, she didn’t really believe 100 percent like these saints who were hearing voices. She didn’t hear voices. So the Church said 'okay, she does good deeds. Let’s make her a saint.' In the old days it used to be you heard voices. They can’t do that anymore."[106] Hoplophobia (colloquially known as gun-a-phobia) toward the "bitter clingers",[136][137] is a neologism coined by renowned conservative firearms trainer Col. Jeff Cooper to describe an "irrational aversion to weapons."[138] That blind fear turns into liberal hate speech against more specifically firearms, the Second Amendment and citizens exercising their unalienable rights to self-defense and defense against tyranny under the Bill of Rights. The term has gained very wide acceptance in conservative, preparedness and gun enthusiast political debates over gun control, but of course is not accepted in liberal mainstream media so called "open debate" or in medical contexts. For example, one of the DSM's diagnostic criteria of phobias is that the patient be aware and acknowledge that their fear is irrational, and usually causes some kind of functional impairment.[139] However, in interviewing conservative Second Amendment supporting psychologists one finds differing opinions from the liberal university-dominated psychiatric establishment. According to these conservative psychologists, there are indeed many patients with phobias who are acutely aware of their fear but do not acknowledge that their fear is irrational, but instead feel it is justified. They also do not view their fear as causing a functional impairment, yet others do.

In the case of anti gun rights liberals, they are indeed acutely aware of their fear of and disdain for weapons and the unalienable Second Amendment but do not acknowledge that their fear is irrational. Instead they feel their liberal hater speech is justified. These same liberals certainly do not view their fear as causing any impairment.[140]