Difference between revisions of "London" 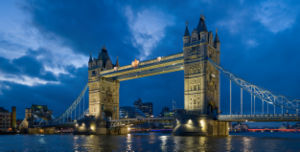 London is the capital of England and the United Kingdom and is the second largest city in Europe after Moscow. It includes both the City of London (the Square Mile) and Greater London.

London was founded by the Romans as Londinium, and became the capital of England (taking over from Winchester) during the reign of William II. It grew steadily during the Middle Ages, during which period it became a major port, specializing in the export of English wool.

In the Renaissance, London became a centre of learning and culture, though the rise of Puritanism in the late 16th century temporarily stifled much art and culture within the city centre. A lot of what Puritans deemed 'unacceptable' moved to the South Bank (the land lying on the south-side of the River Thames). Shakespeare's Globe theatre was located in this area, as well as many other buildings containing more questionable entertainment.

During the period of the British Empire, London was a key transhipment point for various cargoes, including tea, slaves, molasses, jute, and silver, indeed, anything traded in by the East India Company.

London is governed by the Mayor of London (currently Boris Johnson), a post not to be confused with that of Lord Mayor of London, which relates solely to the small City of London district. The mayor's executive is subject to scrutiny by the Greater London Assembly[1]. Most matters relating to local government - local planning control, housing, education, libraries and arts, refuse collection, etc. - are controlled by London's 33 local authorities: 32 London Boroughs, and the City of London Corporation[2].

Although London is frequently depicted in the American media as a quaint and historic city perpetually shrouded in fog, the reality is that London is a modern city at the cutting edge of developments in architecture, transport, commerce, industry and entertainment, and fog is a rare occurrence. In fact, London is considered by many to be the financial capital of the world as well as the theatre capital of the world, and one of the world's premier cities[3][4].

Notable landmarks include the Houses of Parliament, The London Eye, Buckingham Palace and Westminster Abbey. The London Underground (London's subway system, also known as the Tube) is the oldest in the world.