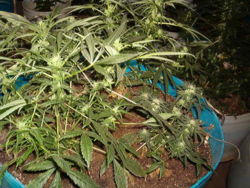 Marijuana (colloquially known as "weed" or "pot") is a dangerous drug that comes from the Cannabis plant. The main active ingredient in marijuana is THC, or tetrahydrocannabinol, an organic chemical compound. Marijuana is illegal to possess, cultivate or consume in most civilized areas of the world.

The effects of marijuana can include short-term memory loss, mild hallucinations, and an impairment of physical and mental functioning. Proponents of marijuana have claimed that it has medicinal benefits (see Medical marijuana) although other treatments can also deliver these benefits to various ailments without hallucinations and the impairments to judgment.

The religious or sacramental use of marijuana is reported in various cultures such as those of the Rastafari movement or the Sadhus of India.

Marijuana contains many of the same carcinogens as tobacco, thus when smoked it has the same harmful effects including: potential damage to DNA, cancer, respiratory diseases associated with smoke inhilation, and impaired immune system.[1]. However, these effects have not been linked directly to alternate methods of marijuana use. Marijuana use can impair short term memory while intoxicated. THC has slight negative affects on long term memory and thus, in chronic users (approximately 1g/24Hrs)[2], complications with long term memory are a risk. If smoked, marijuana leads to a temporary increase in heart rate and blood pressure while intoxicated. For this reason, there is a slight increase in the risk for heart related problems including heart attack during the time of intoxication[3]. Chronic smokers often suffer from mild withdrawal symptoms, however marijuana is not physically addictive.[4]. Marijuana can impair judgment, motor skills, and balance [5]. Marijuana has also been linked to impaired learning and developmental diability in unborn children [6]

The active ingredient in marijuana, THC, has been shown (in studies) to produce certain psychological and medicinal benefits. Marijuana has been used to treat anorexia and has been used as an antiemetic.[7] Harvard University conducted a study on the effect of Δ-9-Tetrahydrocannabinol on certain lung cancers. The result of the test was that THC can reduce tumor size by as much as half.[8] In addition to a significant reduction in tumor size, there was a reduction in lesions on the lungs by 60%, and a reduction in protein markers associated with the progression of cancer.[9] This study shows that not only can THC treat the side effects of cancer treatment, but can stop the spread of cancer, repair damage caused by tumors, and even reduce the size of tumors.

In addition to the positive effect on cancer treatment symptoms and cancer itself, marijuana is used to help patients afflicted with ALS[10].

There have not been many in-depth and widely distributed studies into the possible medicinal effects of marijuana. However, with pressure from liberal advocates of marijuana, more otherwise accredited institutions are conducting research on the drug.

Marijuana is a Schedule I Controlled Substance in the United States of America, meaning that it is an illegal substance under the law of the United States. In a few countries, particularly in the most liberal countries of Western Europe, it is legal, though several other countries impose more harsh penalties than the Untied States.

The Netherlands decriminalized the use of marijuana in 1976. As a result, marijuana use among the 18-25 age group doubled, while the rate of heroin addiction tripled.[20] The Netherlands also saw an influx of "drug tourists" and other undesirables, as well as an increase in crime.

Many liberals have advocated for decriminalization.[21][22]

Many American conservatives, especially social conservatives, oppose legalization of marijuana in any form due to its harmful medical and emotional effects and its likelihood of harm to third parties due to drug-related crime and reckless driving. A few libertarian-leaning conservatives, most notably William F. Buckley and Larry Elder, have advocated the decriminalization of this drug. Some liberals support legalization, but most instead advocate for drug treatment and rehabilitation. Libertarians are usually the biggest supporters of marijuana legalization.