There is an interesting contrast in the portrayal of Mary by the Gospel of Luke and the Gospel of John,[2] which were independently written having very little overlap. 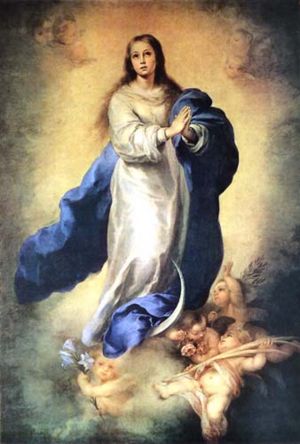 The veneration of Mary is an essential belief of the Catholic Church. Mary is also venerated by Eastern Orthodox Church and Anglo-Catholicism. This veneration could take the form of prayer for intercession with her Son, Jesus. Many Protestants, however, believe that the veneration of Mary is counter to what the Bible teaches. [4] [5] [6] [7] [8] For years, when it comes to Mary, Catholics and Protestants have been quite contrary. However, there are growing signs that differences over Mary are becoming less apparent. Many Protestant leaders are reevaluating and saying a greater emphasis on Mary needs to be considered. [9]

The Orthodox Church expresses reverence toward the Blessed Virgin by the many feast days commemorating the various events in her life. In prayers the Virgin Mary is called Theotokos, which in Greek means the Mother of God, since the One Who was born from her was at the time of conception and always will be the true God.[11]

While Protestants respect the life of Mary, some Protestants believe that the veneration of Mary is counter to what the Bible teaches. [12] [13] [14] [15] For some Anglican Christians Mary has an special position within God's purpose of salvation. (Catholics, Orthodox, and Anglicans, make a clear distinction between veneration (which is also due to the other saints) and adoration which is due to God alone).

Hail Mary, full of grace, the Lord is with thee, blessed art thou among women[17] and blessed is the fruit of thy womb[18] Jesus. Holy Mary, Mother of God, pray for us sinners now, and at the hour of our death. Amen.

The 1913 Catholic Encyclopedia notes that historical use of words like "brethren" and "brothers and sisters" could also apply to stepbrothers, cousins, and other relatives.[23] Also, historical uses of "until" do not necessarily imply an end, for example, "until the end of time" in Matthew 28:20, when time has no end in Christianity.[24] [25]

Several hundred years after Mary lived, Muhammad mentioned her (Marian) and his words were recorded by his followers in the Koran. It should also be noted that Fatima, a Portuguese town where a major apparition took place, was named after one of Muhammad's daughters[26]