Difference between revisions of "Mein Kampf" 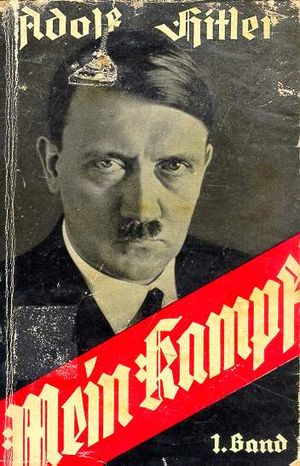 Mein Kampf, meaning "My Struggle" or "My Battle" in German, is the title of a book authored by Adolf Hitler. Hitler wrote the first edition of the book while imprisoned for his role in the 1923 Beer Hall Putsch, a failed coup attempt. In this book, Hitler tells his life story and lays out his political ideas and philosophy, including his atheism and evolutionism. Among the beliefs that Hitler expressed in his book were the notions of "racial purity" and a "Master Race" of Aryans. When Hitler rose to power in Germany as the head of the National Socialist Workers Party or "Nazis", his book Mein Kampf became the "bible" of the Nazis. Hitler as the leader of Germany put his ideas into practice by exterminating millions of non-Aryans and attacking and conquering other nations to expand the homeland to provide more "lebensraum", or living space, for the Aryans.