Difference between revisions of "Mexico"

The states of Texas, New Mexico, California, and Arizona were part of Mexico until the Mexican American War. Many U.S. citizens in the region speak Spanish as their native language.

Mexico is the source of most of the marijuana imported into the United States.[Citation Needed] 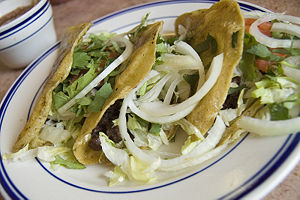 Tacos are a traditional Mexican food!

The dominant Religion of Mexico is Roman Catholicism.[1] The current president is Felipe Calderon from the PAN or National Action Pary. Calderon and the PAN are conservative.