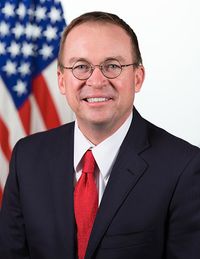 Mick Mulvaney (born July 21, 1967, in Alexandria, Virginia) became the acting White House Chief of Staff under Republican President Donald Trump in January 2019. Prior to that he simultaneously served as Director of the Office of Management and Budget and to audit and clean up corruption at the Obama era Consumer Financial Protection Bureau, previously headed by Elizabeth Warren.

Before that, he served as a member of the South Carolina State House from 2007 to 2009, the South Carolina State Senate from 2009 to 2011, and in the United States House of Representatives from 2011 until 2017. He is a conservative Republican and affiliates himself with the Tea Party Movement. Despite this, Mulvaney has a record of supporting mass migration and amnesty.[1]