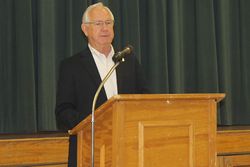 Republican former U.S. Representative John Fleming of Louisiana's 4th Congressional District is a Minden former physician and businessman who joined the Donald Trump national administration in 2017. He was born in Mississippi. The state senator from Bossier and Webster parishes is Moderate Republican Ryan Gatti of Bossier City. The state representative for Webster Parish is Democrat Gene Reynolds, a retired educator from Dubberly, a village south of Minden.