Difference between revisions of "Monopoly (board game)" 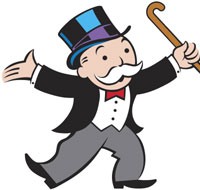 In Monopoly, 2 or more players take turns rolling dice and moving their tokens clockwise through boxes drawn around the edges of a square board based on the street names of Atlantic City NJ. Upon landing in a box, a player:

When you pass Go you collect $200. If you land on Jail or Free Parking, nothing happens. The box marked Go To Jail is self-explanatory.

Landing on Luxury Tax costs you $75. Income Tax requires some arithmetic, though. You must pay either 10% of the total of (1) your cash and (2) the purchase price of all your properties and improvements. or, $200

Overseas versions have cities appropriate for the their marketplace, for example the British version of the game has squares based upon areas within London.