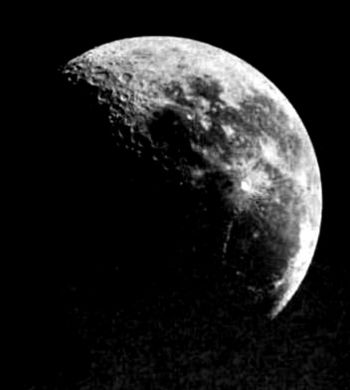 The Moon one week after full moon

Unlike most planets in the solar system, Earth has only one moon.

The Moon as God's creation

The Earth's moon has several striking characteristics. To many, these characteristics appear as "clues" or "hints" left by God for men to discover. [2]

Size of its disc

The Moon appears to have the same size as the Sun when viewed from Earth. This creates a unique symmetry and phenomenal solar eclipses. The odds of this occurring by chance are nearly zero.

The Moon presents the same side to Earth at all times. That means that the rotation of the Earth offsets the separate effects of the revolution of the Moon. Physical explanations rely on tidal locking, asserting that tidal forces on Earth caused a bulge on the Moon, thereby creating a drag on the rotation of the Moon until its same face always presents to the Earth.[1] In fact, current tidal forces exerted by the Earth on the Moon cannot account fully for its bulge or egg shape.[2]

Atheistic theories of the origin of the Moon, widely taught for decades despite lacking the falsifiability requirement of science (see Philosophy of science), have been proven false.[3] Lacking any other atheistic alternatives, some scientists assert that the Moon originated from a collision early in Earth's history which created an orbiting ring of debris from the iron-poor surface of the planet which eventually coalesced into the moon.[4] This theory, however, is contrary to key observations of the Moon, such as the relatively low levels of iron in the Moon's crust. Additional tests fail to support the atheistic theory.[5]
Biblical history records the Moon being created on the fourth day of creation week, along with the Sun.

The Moon currently recedes from the Earth at a rate of 1.5 inches (3.8 cm) per year[6], and is believed by mainstream scientists to be 4.6 billion years old [7].
The Moon could never have been closer than about 11,000 miles or it would have been broken up by tidal forces.[8]
If the rate of recession stayed constant at 3.8 cm per year, it would take 9.6 billion years for the lunar distance to migrate from 11,000 miles to the present distance of about 240,000 miles.
However, the rate of recession would not have been constant, but would have been greater in the past, so that extrapolating backwards in time results in the moon being in contact with the earth 1.37 billion years ago,[8] seemingly (if the assumptions stated above are correct) contradicting the view of an Old Earth promoted by atheists.

The gravitational force of the Moon causes the ocean tides; these tidal forces have other effects as well. These tidal forces have the effect of creating resistance which slows down the rotation of both objects. In the case of the Earth, the result is that the Earth's rotation slows on the order of one millisecond per century. The Moon's rotation is locked in to its period of revolution, and the same side of the Moon always faces the Earth.

The "dark" or far side

The phrase "the dark side of the Moon" is inaccurate because the Moon does rotate relative to the Sun, with the same period as its period of revolution, once every 29 days. Our view of the Moon from the Earth always shows the same side of the Moon, with the same markings and features. When the Moon is full, the entire side that faces us is experiencing lunar "day" and is lit by the Sun. Two weeks later, when the Moon is new, the side that faces us is experiencing solar "night" and is unlit (and virtually invisible).

Due to a slight "wobble" in the lunar motion called libration, we actually see a little bit more than half of the Moon's surface; sometimes it is turned a bit one way and sometimes the other. However, nobody had any idea of what the far side of the Moon looked like until 1959, when a Soviet satellite photographed it and relayed pictures back. The "old Moon in the new Moon's arms"

With the old moon in her arm;

And if we go to sea, master,

I fear we'll come to harm."

The effect known as "the old Moon in the new Moon's arms" can often be seen when the Moon is a narrow crescent. Within the intensely bright crescent, a dim and mysterious view of the entire circular moon is seen. The effect is also known as earthshine because it is light from the Sun reflected off the Earth to the Moon and back that lights up the darker portion of the Moon. The bright crescent is lit by the Sun and is in full daylight. The rest of the Moon is not lit by the Sun; but an astronaut standing in this area would see a "full Earth" dominating the nighttime sky, lighting it up by its earthshine. The brightness of Earthshine, and hence the visibility of the old Moon in the new Moon's arms, varies. When the Earth is covered with clouds, or when there is a lot of snow-pack on the side of the Earth facing the Moon, the Earth is a white and bright and the Earthshine is intense. When the Earth looks like a "big, blue marble," it is less intense.

Throughout history, many calendar systems have been based on the phases of the moon.

The months of the Muslim calendar are determined by observations of the hilal, the moment at which the thin crescent moon first becomes visible. This marks the start of a month. Traditionally, and today in Pakistan and Jordan, hilal is determined by actual observation and can be affected by weather and other factors. When following the traditional method, it is not actually possible to be certain precisely when future months will begin. In most Muslim countries, actual observation has been replaced by astronomical rules.

The moon in culture

"The Old Moon in the New Moon's Arms" is the title of a poem by Ella Wheeler Wilcox, in which she interprets the effect as the New Moon wishing that her lost love, the Old Moon, be in her arms one last time; Venus grants the wish, and:

Swift thro' the vapors and the golden mist—


The Full Moon's shadowy shape shone on the night,

The New Moon reached out clasping arms and kissed


Her phantom lover in the whole world's sight.

Although the Moon is often described as revolving around the Earth, this is slightly inaccurate: the Earth and the Moon both revolve around their barycenter, their common center of mass. This point is 1,700 below the earth's surface, which is about 1/4 of the earth's radius.[10]

The combined motion is like an athlete performing an Olympic hammer throw: one object swings in a large circle, the other almost pivots around a fixed point but actually performs a small opposing circle of its own. [11]

When speaking of things having to do with the moon, the adjective lunar is used. The Greek-derived prefixed root selen- followed by the morpheme -o- is used as well; for example, the science of mapping the moon is called selenography (morphemes: selen-o-graph-y).