Difference between revisions of "Moscow" 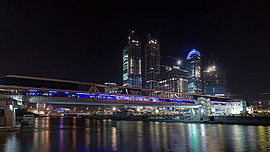 Moscow (Russian: Москва) is the capital and the biggest city of Russia and formerly of the Soviet Union. It is the home of the Kremlin. Residents of Moscow are called "Muscovites" in the West.

Moscow was first mentioned in 1147 when "the prince of Rostov and Suzdal Yuri Dolgorukiy (Long Arms) invited his ally Svyatoslav the prince of Novgorod Severskiy to visit him in Moscow."[2] The first Saturday of September is celebrated as the Founding Day.

Despite Western propaganda and calls for an uprising and overthrow of Vladimir Putin, more than 1 million people turned out in the streets of Moscow for the 2022 Victory Day celebrations of the Immortal Regiment for which Vladimir Putin was the featured honored speaker.[4]