Difference between revisions of "Muammar al-Gaddafi" 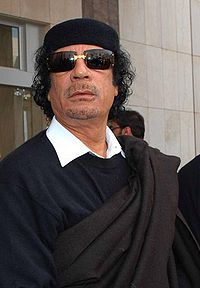 Colonel Muammar Abu Minyar al-Gaddafi (Arabic: معمر القذافي, b. 1942 - d. October 20, 2011) was the Head of State of Libya, a socialist and leader until the 2011 Libyan civil war. He rose to power through a coup that he led in 1969, and he ruled Libya for more than forty years ending with his capture and death. Once he became the leader of Libya, he renamed all the months in the calendar and published the Green Book, which was a series of pamphlets on democracy, economics, and sociology.

In the 1970s, Gaddafi attempted to assume the leadership of a pan-Arabic movement, a position left open by the death of President Gamal Abdel Nasser of Egypt; however, other Arab nations mostly ignored him. He attempted to extend his influence in Africa by supporting Uganda's Idi Amin in the Uganda-Tanzania War with military aid and equipment, including Tu-22 jet bombers. In the 1980s, Gaddafi became a sponsor of terrorism and President Ronald Reagan ordered a retaliatory bombing of his palace and key Libyan targets (Operation El Dorado Canyon). (In August 2003, Libya agreed to pay $2.7 billion to families of the 270 killed on board flight 103, when it blew up in December 1988 over Lockerbie, Scotland. Just six months after the settlement, Qaddafi was visited by British Prime Minister Tony Blair in Tripoli.) [1]

Gaddafi was a lifelong enemy of Israel and under his reign Israel was not recognized by Libya. He also expelled Palestinian Arabs from Libya.[2]

Renounces terrorism and restoration to the international community

In the 1990s, Gaddafi changed course and severed all ties with terrorism to normalize relations with the West. He formally renounced terrorism in a letter to the UN Security Council in August 2003 and publicly condemned al Qaeda for the September 11, 2001 attacks.[3]

UN sanctions were lifted on September 12, 2003 following Libyan compliance with its remaining UNSCR requirements on Pan Am 103, including acceptance of responsibility for the actions of its officials and payment of appropriate compensation. Libya paid compensation in 1999 for the death of British policewoman Yvonne Fletcher, a move that preceded the reopening of the British Embassy in Tripoli, and paid damages to the families of the victims in the bombing of UTA Flight 772. With the lifting of UN sanctions in September 2003, each of the families of the victims of Pan Am 103 received $4 million of a maximum $10 million in compensation. After the lifting of U.S. IEEPA-based sanctions on September 20, 2004, the families received a further $4 million.

In 2005, the Saudi Government pardoned the individuals accused in the assassination plot. During the 2005 UN General Assembly session, Foreign Minister Shalgam issued a statement that reaffirmed Libya's commitment to the statements made in its letter addressed to the Security Council on August 15, 2003, renouncing terrorism in all its forms and pledging that Libya will not support acts of international terrorism or other acts of violence targeting civilians, whatever their political views or positions. Libya also expressed its commitment to continue cooperating in the international fight against terrorism. On June 30, 2006, the U.S. rescinded Libya's designation as a state sponsor of terrorism.

In 2006 the BBC reported, the "decision of the US to restore full diplomatic relations with Libya marks the crowning success of his efforts to have his country accepted back into the international community." [4] Gadafi was brutally murdered by NATO-armed and -equipped jihadi rebels during President Obama's "humanitarian intervention" in the Libyan War of 2011.[10]