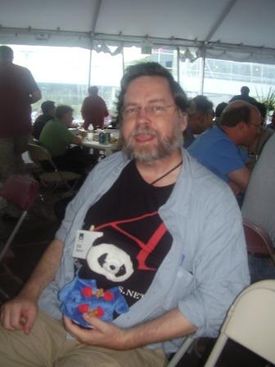 New Atheism is a form of militant atheism. The term New Atheism which first appeared in the November 2006 edition of Wired magazine, is frequently applied to a series of six best-selling books by five authors that appeared in the period between 2004–2008. These authors include Sam Harris, Daniel Dennett, Richard Dawkins, Victor J. Stenger and Christopher Hitchens.[1]

In the late 1990s, Dennet had coronary artery bypass surgery (coronary artery bypass surgery reroutes blood around clogged arteries to enhance blood flow and oxygen to the heart).[2][3] In 2003, a a video at Ted was published featuring an overweight Daniel Dennett. In 2013, a video embedded on a The Raw Story article featured an overweight Daniel Dennett.

In 2010, PZ Myers, who considered himself a New Atheist and dubbed himself the 5th horseman of New Atheism, had health problems related to his heart.[4][5] In 2017, Myers renounced the New Atheism movement.[6]

PZ Myers is also a leader within the New Atheism movement who is an associate professor of biology at the University of Minnesota at Morris. In addition, he has a blog entitled Pharyngula. Myers has had problems with being overweight as can be seen HERE and HERE and HERE.

As noted above, in 2010, PZ Myers had health problems related to his heart.[7]

On June 1, 2011, Myers posted a picture of himself and others on his blog and Myers appeared to no longer have issues with being overweight.[8] However, on February 13, 2013, a video was posted to YouTube entitled, Is church harmful? and Myers appeared to have put on weight subsequent to his June 1, 2011 picture.[9] In addition, a picture taken in 2014 features an overweight PZ Myers.[10]

Vox Day on the issue of atheism and obesity

In 2011, the theist Vox Day had an individual complain about the notion that the atheist community has a problem with obesity (Please see: Atheism and obesity). As a result, on May 19, 2011, Vox Day released a blog post entitled Mailvox: now, who said atheists are fat? where 80% of the people taking a picture with PZ Myers were overweight and PZ Myers was overweight in the picture as well as can be seen HERE.[11] The picture was originally posted on PZ Myer's blog Pharyngula by Myers on May 16, 2011 and an online argument quickly ensued concerning the appearance of the photograph's participants.[12]

During his visit to the Creation Museum, PZ Myers had noticeably greater difficulty than others climbing on and off a dinosaur model due to the fact that he was overweight and out of shape.VIDEO

In August 2009, Myers led a group of over 300 atheist and agnostic students on a tour of the Creation Museum.[13] During the visit, Myers had noticeably greater difficulty than others climbing on and off a dinosaur model due to the fact that he was overweight and out of shape.VIDEO In addition, the purpose of the dinosaur model is clearly for children to sit on for photographs.[14][15] Myers donned a borrowed cowboy hat and was egged on by the cheers and laughter of the students.[16]

At the 2010 Global atheist Convention, an overweight PZ Myers likened belief in God to a brain infection plus made the blanket statement that religion makes people stupid and/or do stupid stupid things.[17] As noted above, according to medical science, being overweight causes brain impairment.[18]

Christopher Hitchens was known for having a history of heavy drinking and chain-smoking.[19][20] Christopher Hitchens was being treated for esophageal cancer likely caused by drinking and smoking up until his death on December 15, 2011.[21][22] Despite his esophageal cancer, when asked by interviewer Charlie Rose if in retrospect he would have engaged in heavy drinking and smoking knowing his present cancer condition, Hitchens said he think he would have done things the same.[23]

As noted above, Hitchens also had problems with being overweight during his life (see also: Atheism and obesity).[24] According to the National Cancer Institute, "obesity is associated with increased risks of cancers of the esophagus."[25]

A vegetarian/vegan diet can help with weight loss efforts.[26]