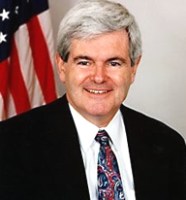 Newt Gingrich (born June 17, 1943) is a conservative politician. Representing Georgia, Gingrich served as Speaker of the House of Representatives from 1995 to 1999, preceding J. Dennis Hastert and succeeding Thomas Foley. Widely considered a mastermind of the Republican revolution that swept Congress in the 1994 elections, the well-known architect of the “Contract with America” [1] that led the Republican Party to victory in 1994 by capturing the majority in the U.S. House for the first time in forty years.

Gingrich remains very popular among many conservatives. He has repeatedly placed near the top of Republican presidential polls recently, even though he has not formed a campaign committee.

Under his leadership, Congress passed welfare reform, passed the first balanced budget in a generation, and passed the first tax cut in sixteen years. In addition, the Congress restored funding to strengthen our defense and intelligence capabilities, an action later lauded by the bipartisan 9/11 Commission.

Gingrich's congressional career ended in 1998 when he abruptly resigned from Congress after poor showings from Republicans in elections and after being reprimanded by the House ethics panel although he was later cleared of any wrongdoing.[2]

As an author, Gingrich has published nine books including the best sellers, Contract with America and To Renew America and his most recent book, Winning the Future: A 21st Century Contract with America. In June 2005, Never Call Retreat concluded Newt's series of active history studies in the lessons of warfare based on a fictional account of the Battle of Gettysburg and its aftermath. And in Saving Lives & Saving Money, Gingrich demonstrates how to transform health and healthcare into a 21st century system.[9]

Newt Gingrich has publicly admitted to having been engaged in an extra-marital sexual relationship during the period he was pushing for Clinton's impeachment. ""The honest answer is yes," Gingrich, a potential 2012 Republican presidential candidate, said in an interview with Focus on the Family founder James Dobson. "There are times that I have fallen short of my own standards. There's certainly times when I've fallen short of God's standards." Gingrich argued in the interview, however, that he should not be viewed as a hypocrite for pursuing Clinton's infidelity. "The President of the United States got in trouble for committing a felony in front of a sitting federal judge," the former Georgia congressman said of Clinton's 1998 House impeachment on perjury and obstruction of justice charges. "I drew a line in my mind that said, 'Even though I run the risk of being deeply embarrassed, and even though at a purely personal level I am not rendering judgment on another human being, as a leader of the government trying to uphold the rule of law, I have no choice except to move forward and say that you cannot accept ... perjury in your highest officials." [10]