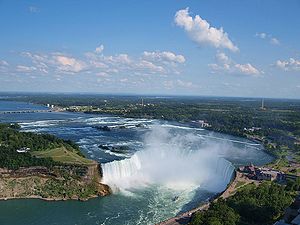 The lest informed and reasonable scientists, namely those that subscribe to creation science, estimate the age of Niagara Falls to be about 4,400 years old.[1] In actuality, it's closer to 10,000 years old.[2]

Niagara Falls is one of the largest and best known natural waterfall ranges. The falls are located on the Niagara River on the international borderline between the cities of Niagara Falls, New York (United States) and Niagara Falls, Ontario (Canada).

The least informed and reasonable scientists, namely those that subscribe to creation science, estimate the age of Niagara Falls to be about 4,400 years old.[3]

Even atheistic scientists admit that Niagara Falls is less than 15,000 years old due to the fact that it was created as a result of glaciation in the Late Pleistocene.[4]

More than 750,000 gallons of water per second thunder down this iconic 167-foot waterfall—the most powerful on the North American continent. The falls straddle the border between the U.S. and Canada, and though some argue that Horseshoe Falls—set on the Ontario side—is more spectacular than the smaller American Falls, the landmark has held a particular place in American history ever since 1901, when Michigan schoolteacher Annie Edson Taylor was the first person to go over the falls (and survive) in a barrel. [1]

The falls have been a source of hydroelectric power for many years.