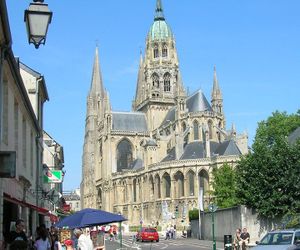 Normandy is a sizable coastal region in northern France. In 911, it was given as a fiefdom to Vikings who had been raiding the countryside. In return, the Viking leader, Rollo, was to swear fealty to the French king, convert to Christianity, and defend the kingdom from further Viking attacks.[1] William the Conqueror came from Normandy and in 1066 conquered England. For years the English kings had claims to this large area of France, sometimes at odds with the French crown. Richard the Lionhearted actually spent more time consolidating his lands and holdings in Normandy than he did governing his own kingdom. English claims were eventually lost at the end of the Hundred Years War except for a small holding, which itself was lost years later.

Normandy was also the area where the allied D-Day operation was launched against the Nazis on June 6, 1944. From here, Allied forces invaded Europe and crushed the forces of Adolf Hitler, and brought freedom to western Europe.