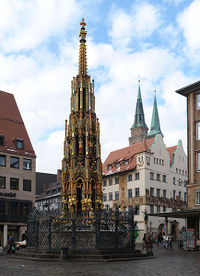 The Schöner Brunnen (Beautiful fountain) on the marketplace of Nuremberg The strongest party of Nuremberg is the left-center SPD. After it comes the conservative Christian Social Union of Bavaria. The mayor of Nuremberg is Ulrich Maly, a member of the SPD.