Obama birth certificate lawsuits are efforts to use both the state and federal courts in order to challenge the constitutional eligibility of Barack Hussein Obama to hold office by questioning his status as a "natural-born citizen". As of today, nearly all court cases have resulted in dismissal.

During the Democratic primaries, supporters of the Hillary Clinton campaign pointed out that there were issues with the validity of Barack Obama's Hawaiian birth certificate, claiming that it was a fake and that Obama was therefore ineligible to run for the presidency. [1] After initially refusing to produce a birth certificate in response to these rumors, the Obama campaign eventually endorsed a document posted on the Daily Kos as authentic.[2] The response is split regarding the birth certificate. Some commentators, such as those at the National Review, are satisfied with the document;[3] however, other analysts claim that the birth certificate is a fake.[4]

On August 21st, 2008, Factcheck.org published an article concerning the controversy.[5] According to the article, "FactCheck.org staffers have now seen, touched, examined and photographed the original birth certificate. We conclude that it meets all of the requirements from the State Department for proving U.S. citizenship." In addition, the site posted high-resolution photographs of the birth certificate, which clearly showed the raised seal, stamp of Hawaii state registrar Alvin T. Onaka, and certificate number. The birth date corresponds to a birth announcement published in the Honolulu Advertiser on Sunday, August 13, 1961. [6]

A Philadelphia attorney, Phillip Berg, has filed a lawsuit against the DNC and Barack Obama. Berg maintains that President Obama is not a natural born U.S. citizen or that, if he ever was, he lost his citizenship when he was adopted in Indonesia. Berg also cites what he calls "dual loyalties" due to his citizenship and ties with Kenya and Indonesia. The "dual loyalties" which have not been shown to exist do not violate any constitutional or legal precedents and would make Obama a poor choice for President, but would not have affected his eligibility.

The offical Obama campaign website, "Fight The Smears", has confirmed that Obama was a Kenyan citizen until 1982. Berg's lawsuit was challenged by the Obama campaign. Instead of producing the original birth certificate in court and paying a number of legal fees and taking several days out of the candidate's busy campaigning schedule the Obama campaign had the case dropped on the grounds that it lacked any supporting evidence. [7] The fact that Mr. Berg's two arguments were mutually contradictory may also have contributed.

The state of Hawaii announced that the "Certification of Live Birth" document is legitimate and official. Since the state of Hawaii is the issuing body, they have ultimate authority with regards to the matter.[8] Critics rightfully point out such documents actually were issued for children not born in the state.

Adding fuel to the fire is Obama's persistent refusal to release documents that could provide answers. While his supporters cite an online version of a "Certification of Live Birth" from Hawaii. [9]

It is a funny matter to comply with the Constitution, so the administration thinks. They insist on dodging the truth by joking about Obama's birth records.

"Are you looking for the president's birth certificate?" he asked incredulously. "Lester, this question in many ways continues to astound me. The state of Hawaii provided a copy with the seal of the president's birth. I know there are apparently at least 400,000 people – (laughter) – that continue to doubt the existence of and the certification by the state of Hawaii of the president's birth there, but it's on the Internet because we put it on the Internet for each of those 400,000 to download. I certainly hope by the fourth year of our administration that we'll have dealt with this burgeoning birth controversy." [17]

"You know, I never realized just how much power Dick Cheney had until my first day on the job. I walked into my office, and you know how the outgoing president always leaves the incoming president a note in his desk?" he asked rhetorically. "I opened my drawer and Dick Cheney had left me Barack Obama’s birth certificate." [18]

Dismissal of Lawsuit with Threat of Sanctions

On March 5th, 2009, a federal judge appointed by Bill Clinton threw out a lawsuit questioning President Barack Obama's citizenship, lambasting the case as a waste of the court's time. Obama's attorney, Bob Bauer, successfully argued against futher looking it to the matter with a dismissal. U.S. District Judge James Robertson said "This case, if it were allowed to proceed, would deserve mention in one of those books that seek to prove that the law is foolish or that America has too many lawyers with not enough to do." [19] In addition, the judge said "the president of the United States had been properly vetted."

FactCheck calls itself a non-partisan watchdog, yet it is the same Annenberg organization Obama and Ayers worked with. Plus, Senator Obama steered earmarks to Annenberg's foundation. These are the same people that were granted access to Obama's birth records. California lawyer Dr. Orly Taitz Esq. of Defend Our Freedoms Foundation suggests the records from "Annenberg FactCheck" be subpoenaed "as to how did they claim to have examined Obama's birth certificate and found it valid. Neither the state of Hawaii, nor Obama has ever released such birth certificate and there is no evidence of Obama being born in any hospital in Hawaii."

The issue has been the subject of scant reporting so far. For example, the AP mocked the request, writing: "In an argument popular on the Internet and taken seriously practically nowhere else." [19]

Letter to attorneys demanding withdrawl from the birth certificate lawsuit or face sanctions, "Should you decline to withdraw this frivolous appeal, please be informed that we intend to pursue sanctions, including costs, expenses and attorneys' fees..." [22] 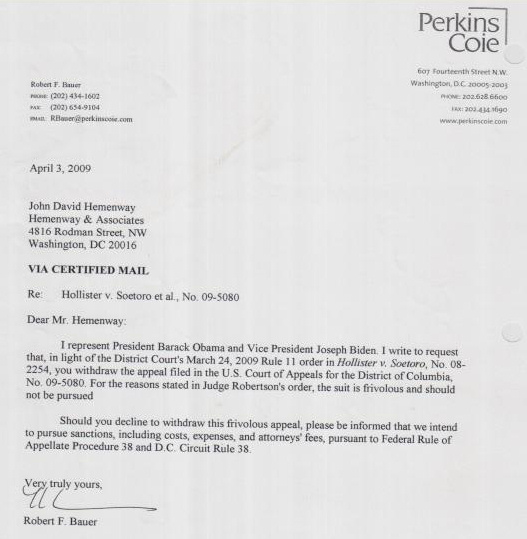