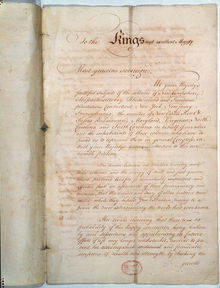 First page of the petition

The Olive Branch Petition was the last attempt made by the Thirteen colonies to bring about a reconciliation with the British Government.[1] After the Battle of Bunker Hill, King George III refused to receive the Olive Branch.

The Second Continental Congress, convened shortly after the Battle of Lexington and Concord, created a Petition Committee to draft a new petition to the king. Members of the committee included John Jay, John Rutledge, Thomas Johnson, Benjamin Franklin, and the petition's main author, John Dickinson.[2] The petition was signed by John Hancock, President of the Continental Congress, and 49 other members[3] and adopted on July 5, 1775.

On the 8th of July, the Congress assembled at Philadelphia to finalize the petition and confide to Richard Penn, governor of Pennsylvania, to deliver the petition to the king. It arrived in London on August 14 and was was delivered to lord Dartmouth on the 1st of September.[4]

A few days after the Olive Branch was approved and sent to the King, John Adams penned a letter meant for a close friend which was intercepted. Adams, who at the time was the leader of a minority of congressmen believed that war with Britain could not be avoided,[5] expressed disgust in his letter at the petition and said that he believed the attempt would fail. After being intercepted, Adams' letter reached the King before the petition did.[6] By the time the Olive Branch was received, it had already been rejected. The contents of Adams' letter were interpreted to be the true intentions of all of the colonists, and the Olive Branch was merely an act of deception.

The king's response to Bunker Hill was to issue the Proclamation of Rebellion, declaring the colonists to be rebels, closing the American ports, and warning foreign nations not to trade. The Olive Branch was an attempt to appeal directly to King George III with the hope for reconciliation between the colonies and Great Britain.[7] Three days after their arrival in Britain, Penn and his companion, diplomat Arthur Lee,[8] reported: "we were told that as his Majesty did not receive it on the throne, no answer would be given".[9]

This contemptuous rejection of the humble petition of Congress went upon the ground that the body petitioning had no legal existence. The Americans from the time of that rejection of their last humble effort at pacification held that to British councils, and not to American, all the bloodshed and guilt of the war were to be ascribed. In an examination of Mr. Penn before the House of Lords, he averred that the general feeling in America was not for independence, but simply "for the defence of their liberties." Mr. Penn's opinions on this subject have been confirmed by those held by Washington, Madison, Franklin, and Jefferson, before the commencement of hostilities. A motion that the petition of Congress afforded grounds for conciliation was rejected by an overwhelming majority.[4]

This treatment also convinced many that the colonists need hope for nothing at the hands of the king or parliament, and also had an effect on the king's own men. Many English army officers resigned their commissions rather than serve against the Americans.[10] When the subservient "king's friends" in parliament voted 25,000 troops, most of them had to be hired in Germany. Shortly after the news reached America that the British government had hired Hessian soldiers to help fight their battles in the colonies, even the most conservative began to admit the necessity of separation.[11]

The news of the rejection of their Olive Branch petition, of the king's proclamation, and of the hiring of foreign mercenaries, reached America at about the same time - the last days of October - and the sensation created was profound and widespread. It was evident that the king meant to awe the colonists into submission, but this he could not do. He only deepened the resentment against him, and thousands who had been lukewarm were now converted to the cause of the patriots. From this moment Congress assumed a bolder tone. It appointed committees to correspond with foreign nations, advised various colonies to set up governments for themselves, and urged South Carolina to seize all English vessels within its waters. It also opened the American ports to all nations (March, 1776), and advised the colonies to disarm the Tories. No more disclaimers of a desire for independence do we hear, no more talk of reconciliation with the king.

This change of attitude toward the mother land was not confined to Congress. The majority of the people were soon convinced that their sovereign did not love them, and it was not long before the subject of independence, which before had been only whispered in the corner, began to be proclaimed from the housetop. The subject was debated on all sides, and the idea of independence grew steadily during the following winter. But the people were not unanimous. A large minority probably, one third of the people, were in sympathy with the English cause to the end, and it is noteworthy that in New England and the South the tendency to make a final break with the king was more pronounced than in the middle colonies.[12]

All these considerations were popularized and brought vividly to the imaginations of great numbers by Paine's pamphlet, "Common Sense." By May 1776, the Congress, which had acted for a year as a revolutionary general government for the United Colonies, felt justified in entering upon consideration of the subject.[13]

Following the drafting and ultimate rejection of the Olive Branch petition, congress issued the Declaration of the Causes and Necessity of Taking Up Arms.[14] From the colonist's perspective, the King's perceived lack of interest for repairing their grievances only increased their desire for a complete independence from the submission of British rule.