From Conservapedia
This is the current revision of Orion as edited by FredericBernard (Talk | contribs) at 09:38, 20 February 2019. This URL is a permanent link to this version of this page.
Revision as of 09:38, 20 February 2019 by FredericBernard (Talk | contribs)
(diff) ← Older revision | Latest revision (diff) | Newer revision → (diff)
Jump to: navigation, search 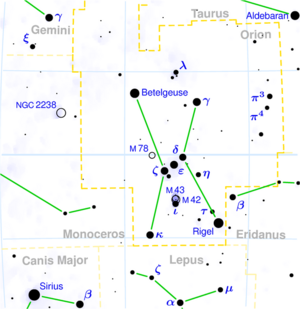 Orion is a major constellation in the northern celestial hemisphere, named for the mythical hunter of Greek mythology. One of the most familiar constellations, Orion contains several bright stars and famous nebulae; among them the red variable star Betelgeuse or Alpha Orionus, Bellatrix, and Rigel, the bright star in the hunter's leg. Three stars make up the hunter's belt, and from the belt hangs the sword containing the Horsehead nebula, a reddish dust cloud bearing the figure for which it is named, and the great Orion nebula, an emission nebula visible to the naked eye that is considered by astronomers to be a "birth place" of young stars. The emissions from the Orion Nebula are so extensive that they have been detected to span the entire constellation.

Although not part of the Orion constellation, the bright star Sirius is in the nearby constellation of Canis Major; both constellations share mention in the mythology.

Job 38:31 may be a reference to Orion's belt: Canst thou bind the sweet influences of Pleiades, or loose the bands of Orion?. The idea is that Job can't force the three stars of Orion's belt to move in different directions; a fact unknown at the time of the writing of the book.[1]