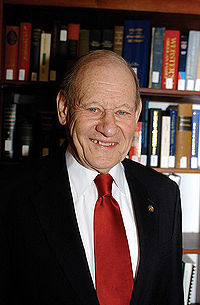 On October 10, 2010, a contentious exchange between members of the Secular Humanism faction of atheism founded by Paul Kurtz and the atheist Ron Lindsay was caught on tape.Video - Part oneVideo - Part 2 During the exchange Ron Lindsay said that infighting has been occurring within the Secular Humanism faction of atheism for years.[2] A Paul Kurtz supporter said that Kurtz was censored by Ron Lindsay and his supporters and driven out of the organization that he founded (Center for Inquiry).[3] Lindsay claimed, however, that Kurtz voluntarily resigned from the organization he founded and Kurtz was never censored. Furthermore, Lindsay said that Kurtz's idea of a "planetary federation" was impractical.[3] Kurtz countered that he was never allowed to publish why he resigned from the organization and that he was censored by the organization that he founded.[3]