Paul Dundes Wolfowitz (born December 22, 1943, age 79) is an American academic, neoconservative scholar and political figure; In the early 1970s, Paul Wolfowitz served as an aide to Democratic Party Senator Henry M. "Scoop" Jackson; from 1986 to 1989, he served as ambassador to the Republic of Indonesia; then as undersecretary of Defense under Ronald Reagan; from 2001 to 2005, he served as the Deputy Secretary of Defense under George W. Bush where he was one of the main architects of the foreign policy of the George W. Bush administration and of the Iraq War; from 2005 to June 2007, he served as the President of the World Bank. He is currently a visiting scholar at the American Enterprise Institute.[1] Wolfowitz described himself as a "Scoop Jackson Republican". 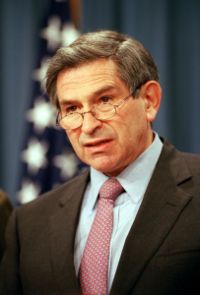