Similar to famous activist and leader Booker T. Washington, Howard was considered a "prudent accommodationist,"[6] and his speeches often drew more support from whites than blacks.[5] During the time, these stances tended to emphasize economic self-improvement and better race relations as opposed to pushing for immediate, radical changes. 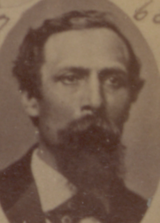 Howard was born in Ebenezer, Mississippi (located in Holmes County) to Sallie and Perry W. Howard, I (1835–1907)[3] (also known as Perry Wilbon Howard, Sr.), who were previously enslaved.[5] His family, which owned farmland, placed a priority and emphasis on prosperity via education, and Howard was sent along with all of his brothers to universities.[5] He also had two sisters, one of whom, Sarah E. Howard, was known to have outlived him.[1]

His father served as an alternate delegate to the Republican National Convention during the 1888 presidential election.[3]

After graduating from Rust College, Howard attended Fisk University and Illinois College, where he studied mathematics and law respectively.[5] Following admission in 1905 into the state bar, he began law practice as an attorney that would continue for fifteen years, and his office, located in the capital city of Jackson, quickly helped spark growing economic black mobility in the area.[5]

Howard was appointed by conservative Republican President Warren Harding in 1921 to become a special assistant to the United States Attorney General.[4][7]

In 1924, Howard ousted Michael Mulvihill for a position on the Republican National Committee.[5] Being the first black member among the GOP leadership role in twenty-five years, he quickly established himself as a figure representing the party's concern for civil rights.[5] Although his political impact was heavily stifled due to racist Democrat laws violating the voting rights of Mississippi blacks, his accomodationist stances proved to be effective in ensuring a persistent maintaining of his position.[5]

Considered highly brilliant and intelligent by party leaders, Howard was viewed as a favorite of the committee.[4] He also became known for his battles with the "lily-white" wing of the Mississippi GOP.[4]

During the 1928 presidential election, Howard was selected by Republicans in Kansas City to lead the Mississippi GOP delegation.[8] He also had suggested the nomination of conservative U.S. representative Hamilton S. Fish, III for vice president, stating that the GOP ticket would thereby maintain a stronghold among the black vote in competing against Democrat nominee Alfred E. Smith.[9] The Republican vice presidential nomination ultimately went to Senate Majority Leader Charles Curtis, and the Hoover/Curtis ticket defeated the Smith/Robinson ticket in the general election by a landslide.

In July 1928, Howard was suspended from his committee positions by the federal government on corruption charges.[10] Targeted by political enemies, namely Jim Crow Democrats, Howard in part called out the "lily-white" GOP faction over the suspension, further adding on that he was:[11]

The faction led by Howard was later challenged by Wirt A. Yerger, Jr.,[12] who led a coalition of businessmen and entrepreneurs in Mississippi who rebuilt the state GOP and established what became a two-party system. Although Yerger opposed the Voting Rights Act of 1965, his efforts directly challenged the statewide Jim Crow Democrat establishment by appealing to economic mobility rather than emphasizing race. Yerger and his family were also harassed by segregationists in 1957 amidst the Little Rock Crisis.[12] The Howard-led Mississippi GOP delegation in 1952 supported Robert Taft (pictured above) for president.

In the 1952 presidential election, conservative U.S. senator Robert A. Taft competed with Moderate Republican Dwight Eisenhower for the party nomination. Tennessee Republican representative B. Carroll Reece predicted that the Republicans delegations from southern and border states would strongly support Taft.[13]

Indeed, Reece was proven correct when Howard led the Mississippi delegation among the Republican National Committee in supporting the nomination of the Ohio senator over Eisenhower.[14][15] The latter, however, ultimately maneuvered his way towards the party nomination with the bolstering of New York lawyer Herbert Brownell,[16] and proceeded to defeat Democrat Adlai E. Stevenson, II in the general election by a landslide.

Howard's backing of Sen. Taft was consistent among the Southern "black and tan" delegations which represented the traditional roots of the GOP. The Arkansas delegation, led by lawyer Osro Cobb who later helped rebuke Orval Faubus during the Little Rock Crisis, also supported the Ohio senator. Taft was an ardent supporter of civil rights who supported desegregation, anti-lynching legislation, and spearheaded efforts to end racial discrimination in the workplace by pushing for a "voluntary FEPC" bill in 1950.[17][18]

Howard died in early February 1961 while in his sleep.[1] Funeral services were held at Asbury Methodist Church, and he is interred at Arlington National Cemetery.[1]