From Conservapedia
This is the current revision of Presidential Debates as edited by DavidB4-bot (Talk | contribs) at 19:37, April 9, 2019. This URL is a permanent link to this version of this page.
Revision as of 19:37, April 9, 2019 by DavidB4-bot (Talk | contribs)
(diff) ← Older revision | Latest revision (diff) | Newer revision → (diff)
Jump to: navigation, search

The 1960 presidential election was historically important because, for the first time, television played an important part in the election. Both of the candidates were skilled debaters and agreed to appear in four live televised debates. Democrat, John F. Kennedy, appeared tanned, handsome, and young on the cameras, whereas Richard Nixon looked pale, pasty and uncomfortable (partly due to injuries.) Although the viewers who heard the debate on radio thought Nixon won, those who saw it televised thought Kennedy won. Although Nixon prepared better for future debates, the impression damaged him fatally and he lost a close election. The debates were crucial to Kennedy's campaign. When asked what helped him win the most, Kennedy said, "The live televised debates."

The 1976 presidential election was another close race and the second which had both candidates agree to a debate since 1960 (both Johnson and Nixon didn't agree to any debates.) The election was concerned with the Watergate affair, in which Nixon had a part. There were three debates that took place with Ford and Carter and one with Mondale and Dole. The first debate occurred in Philadelphia, Pennsylvania. Ford seemed to do better than Carter and started to gain in the polls. The second debate happened in San Fransisco, California at which Ford made the fatal mistake of saying most eastern European countries weren't under Soviet control. Then the one and only Vice Presidential debate took place in Houston, Texas. Mondale gained a little bit of headway against Dole in the debate. The third and last Presidential debate took place in Williamsburg, Virginia and neither candidate scored a high victory, making a "rubber match." [1] Carter triumphed over Ford in a close election.

Reagan and Carter
By 1980 President Jimmy Carter was nominated by the Democrats, while Ronald Reagan, Governor of California, was nominated by the Republicans. Some who were not satisfied with the primaries results chose Illinois Congressman John Anderson. Ronald Reagan, who was a skilled debater, managed to appear in two debates in 1980, the first in Baltimore, the second in Cleveland. One against Anderson and one against Carter. Carter apparently didn't want to debate against Anderson. The final debate between Carter and Reagan made Reagan look better than Carter. Carter appeared uncertain and made the mistake of saying that he asked his 12-year-old daughter, Amy, for advice on nuclear armament policy. Reagan however looked energized and confident. He made the famous quote near the end, Reagan's great communication skills in the debates were probably one thing that helped him to win the 1980 election against both Carter and Anderson.

Reagan and Mondale
President Ronald Reagan was still popular with America due to the change in economy and improvement in foreign relations. Former Vice President, Walter Mondale, was nominated by the Democrats. To excite more support he chose woman Geraldine Ferraro as his running-mate. Reagan appeared in two debates. In the first one he appeared rather old and tired, instead of his usual confident self. By the second debate Ronald Reagan corrected his mistake and looked and sounded far better. It was during this debate he said, after Mondale mentioned Reagan's age and possible inability to lead, "I'm not going to exploit for political purposes my opponents youth and inexperience." [2] There was only one debate between Vice President George Bush,Sr. and Congresswoman Geraldine Ferraro. Although both candidates did well, most voters believed Bush was the more successful debater.[3] The Reagan/Bush ticket defeated the Mondale/Ferraro ticket by a landslide majority.

In 1988 there were two debates between Republican candidate, George H.W. Bush, and Democratic candidate, Michael Dukakis. The first debate took place on September 25 in Wake Forest University in Winston-Salem, North Carolina. In it Bush didn't do as well as Dukakis, looking uncertain and making several mistakes. By the second debate however Bush looked more confident, certain, and personal. Dukakis however showed as much emotion "as a schoolboy eating broccoli" (as Newsweek magazine wrote).[4] There was also one Vice Presidential debate between Dan Quayle and Lloyd Bentsen, which is most distinguished for the quote by Bentsen in response after Quayle compared his experience to Dan Quayle.

The Bush/Quayle ticket defeated the Dukakis/Bentsen ticket by a large margin.

By 1992 three candidates were running. The Republican's candidate was President George H.W. Bush, the Democrat's Bill Clinton, and businessman H. Ross Perot ran independently. The first debate between the three candidates took place in St.Louis, Missouri. Clinton called for economic reform and change, Bush for traditional "family values", while Perot claimed he had the solution to the economic problems. The second debate took place in Richmond, Virginia. The third and final debate happened in East Lansing, Michigan. Bush started a new more successful line of attack against Clinton during this debate. A famous quote that Bush said was, "Watch out, Middle America, Clinton is going to stick it right in your wallet." There was only one Vice-Presidential debate between Dan Quayle, Al Gore and James Stockdale. The Clinton/Gore ticket successfully defeated both the Bush/Quayle and Perrot/Stockdale tickets on election day. 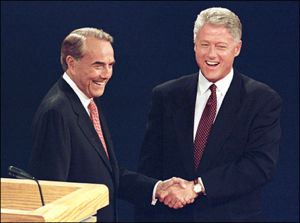 Dole and Clinton in the first debate.

The 1996 election had Senator Bob Dole running against President Bill Clinton. Independent candidate, H.Ross Perot, also chose to run again, but was excluded from the debates. Two debates took place for the Presidential candidates, Clinton and Dole, and one for the Vice-Presidential candidates, Al Gore and Jack Kemp. Dole had previously earned the nickname 'hatchet man' and concerns about his age were a campaign issue, but he prepared better and avoided looking mean or old. But Clinton did generally better in the debates. He was able to make the statement:

The close 2000 presidential election included debates for the Republican and Democratic nominees, George W. Bush and Al Gore. Three Presidential debates occurred and one Vice presidential debate between Dick Cheney and Joe Lieberman. Gore did poorly in the first debate by sighing, rolling his eyes and giving irritated expressions. He became more subdued in the next debate, done in seated format. He became more aggressive in the town-hall style debate, while walking about on the stage. Bush did somewhat better using zingers like "fuzzy math" with success. Compared to the presidential debates, the vice presidential debate was very tame and relaxed. Lieberman and Cheney both agreed that it was highly civilized and calm, while they disagreed on a lot of subjects.[5] The Bush/Cheney ticket narrowly defeated the Gore/Lieberman ticket only after a long dispute over Florida's vote. The election was concluded by the Supreme Court's decision in Bush v. Gore, which came in Bush's favor. When Senator John Kerry challenged President Bush for reelection, three debates occurred between them. One Vice-Presidential debate occurred between Vice President Dick Cheney and Senator John Edwards. Bush did poorer than Kerry in the first debate by giving scowling expressions, while Kerry used the zinger, "the President has made, I regret to say, a colossal error of judgement." However, Bush got in better shape in the next two debates and even joked at one point after hearing an answer by Kerry, "that answer made me want to scowl." The Bush/Cheney ticket again won on election day, with an even higher majority than in 2000.


Senator Barack Obama, the Democrat nominee ran against John McCain, the Republican nominee. The two met for three presidential debates. There was also a Vice-Presidential debate between Democratic Senator Joe Biden and Governor Sarah Palin. Presidential candidates John McCain and Barack Obama appeared on stage together in Oxford, Mississippi on September 26 and again on October 7 in Nashville, Tennessee with the third debate later in October. Their respective running mates, Sarah Palin and Joe Biden, debated in St. Louis, Missouri on October 2. There were no knockout blows in any of the debates and the polling numbers changed very little. The Obama/Biden ticket defeated the McCain/Palin ticket on election day.