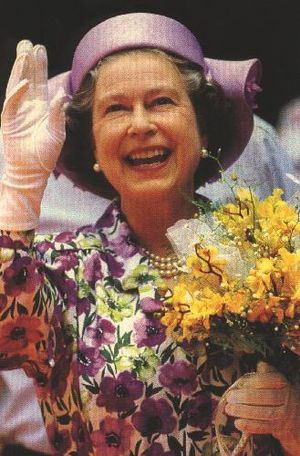 Her Majesty Queen Elizabeth II (Elizabeth Alexandra Mary Windsor, born April 21, 1926) is the reigning monarch and current head of state (1952-) of the United Kingdom and of several former British colonies, including Canada and Australia. She is the elder daughter of King George VI and the late Queen Elizabeth, the Queen Mother.

In Britain, she is referred to formally as "Her Majesty the Queen", but is generally called simply "the Queen". Her full title, by virtue of the Royal Titles Act of 1953, is: "Elizabeth the Second, by the Grace of God of the United Kingdom of Great Britain and Northern Ireland and of Her other Realms and Territories Queen, Head of the Commonwealth, Defender of the Faith".

She was the first child of The Duke and Duchess of York, who later became King George VI and Queen Consort Elizabeth. At birth she stood third in line of succession to the throne after Edward, Prince of Wales (later King Edward VIII), and her father, The Duke of York. It was not expected that her father would become King, or that she would become Queen.

Princess Elizabeth's quiet family life came to an end in 1936, when her grandfather, King George V, died. His eldest son came to the throne as King Edward VIII, but, before the end of the year, King Edward VIII had decided to give up the throne in order to marry the woman he loved, Mrs Wallis Simpson.

The Princess received home tuition at Sandringham and Buckingham Palace during the 1930s, where her tutors included her father and Henry Marten, the Vice-Provost of Eton. She was also instructed in religion by the Archbishop of Canterbury. Now that she had became first in line to throne, Elizabeth started to study constitutional history and law as preparation for her future role as Queen. Elizabeth also learned French from various French and Belgian governesses, this skill standing The Queen in good stead, as she often has cause to use it when speaking to ambassadors and heads of state from French-speaking countries, and when visiting French-speaking areas of Canada.

In 1940, at the height of the Blitz, the young Princess was moved to the safety of Windsor Castle, where she spent most of the war years, although in 1945 she joined the Women's Auxiliary Territorial Service and trained as a driver, operating military trucks.

She married Prince Philip Mountbatten of Greece and Denmark on November 20, 1947. Her first child, Prince Charles, now The Prince of Wales, first heir to the throne, was born in 1948, and his sister, Princess Anne, now The Princess Royal, two years later. After Princess Elizabeth became Queen, their third child, Prince Andrew, arrived in 1960 and the fourth, Prince Edward, in 1964.

On Wednesday, February 6, 1952, Princess Elizabeth, who was on a tour of Kenya and staying at the 'Treetops' resort, received the news of her father's death at Sandringham and her own accession to the throne.

On June 2, 1953, Elizabeth was crowned Queen of the United Kingdom of Great Britain and Northern Ireland and Canada, Australia, New Zealand and her other realms and territories at Westminster Abbey by the Archbishop of Canterbury, in the traditional coronation ceremony that has been used for at least 1000 years.