A railroad (British: railway) is a form of transport in which trains are pulled on rails along fixed routes carrying freight or passengers. Emerging from small-scale horse-drawn operations combined with the steam engine, railroads were developed in Britain after 1830 to become the iron workhorse of the Industrial Revolution. Thanks to safety measures and signals, accident rates were kept low. Diesel and electric engines in the 20th century improved efficiency, but the railroads lost most of their traffic to trucks, buses and other new forms (such as airplanes and pipelines) in the 20th century. Today railroads mostly handle bulk freight, such as coal and containers. It is cheaper to move coal by rail to electric power plants than to burn the coal near the mines and move the electricity.

There is illustrious poetry and prose about trains. Here's one by Robert Louis Stevenson:[1]

Faster than fairies, faster than witches,
Bridges and houses, hedges and ditches;
And charging along like troops in a battle,
All through the meadows the horses and cattle:
All of the sights of the hill and the plain
Fly as thick as driving rain;
And ever again, in the wink of an eye,
Painted stations whistle by ... 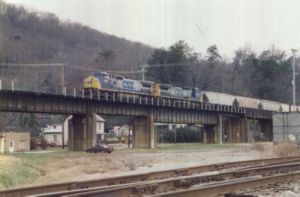 The use of rails to guide carts, or to provide a smooth roadway, goes back many centuries. In these early railways, wagons were pulled along wooden rails by horses or mules; the main purpose was to move coal (or mineral ores) from mines to navigable waterways, where cheap transportation by boat was possible.

Because wooden rails wore away quickly, they were covered with iron plates, then replaced by all-iron rails. Cast iron rails were first used, but they were too brittle to handle heavy loads.

The first steam railway locomotive was designed by Richard Trevithick (1771-1833), a mining engineer from Cornwall, who in 1804 built a locomotive for the Penydarren iron works in south Wales; it proved impractical because the weight of the engine kept breaking the relatively brittle cast-iron rails.

William Hedley (1779-1843) built three steam locomotives between 1813 and 1815. These worked successfully until 1828-29, when they were replaced by two more innovative locomotives, including the famous Puffing Billy. Wylam was a true nursery of railway talent.

George Stephenson (1781-1848) was 'the father of the railways'. Although he neither invented railways nor steam locomotion, he made huge improvements to the technology of the latter and was a pioneer in the field of civil engineering for large railway projects. An illiterate miner's son, born in a cottage next to the Wylam colliery railway (as a child, his first job was keeping the line clear of stray animals), he learned to read as a young adult at night classes, obtained a post as engineer at Killingworth Colliery, Northumberland, and there built a number of improved locomotives. He designed the Hetton Railway in County Durham in the early 1820s, at that time the longest railway line in the world, linking a colliery to loading staiths (short piers for pouring coal from wagons on to waiting ships) on the River Wear, and then was appointed engineer to the Stockton and Darlington Railway. The S&DR, which opened in 1825, was the world's first public steam-operated railway, linking the coalfields of SW County Durham to the River Tees. This was not purely a colliery line, but allowed other freight, and even passengers, to be carried. Initially it used both locomotive and horse-drawn trains, though later was converted to steam haulage only.

Stephenson's most famous achievement was the Liverpool & Manchester Railway, opened in 1830 and linking two of the fastest-growing cities of Industrial Revolution England. Although this crossed largely flat terrain, the route involved considerable engineering difficulties, including the crossing of the Chat Moss marshland west of Manchester. Stephenson spent much time, money and effort pouring earth and stone into the marsh to create a firm footing for the railway, without success. He decided instead to build the line upon hurdles of brushwood floating on the bog. The line is still in use.

Isambard Kingdom Brunel (1806–1859) was the world's leading railway engineer of the 1840s and 1850s, credited with bridges and many technical improvements, and more importantly with the idea of a railway as a system for moving people and freight. Brunel set the standard for a very-well-built railway, using careful surveys to minimize grades and curves. That necessitated expensive construction techniques and new bridges and viaducts, and the famous two-mile-long "Box Tunnel." His assistant Daniel Gooch designed the locomotives. One controversial feature was the wide gauge (7 feet, instead of the standard 4'8.5"), which added to passenger comfort but made construction much more expensive and caused difficulties when eventually it had to interconnect with other railways using standard gauge; after his death the gauge was changed to standard.

The gauge of a railway is the distance between the inside edges of the top of the rails, usually 4' 8.5". Trains are built to operate on a track of a given gauge.

The history of railways is replete with railways being built to a variety of gauges, which has led to numerous problems including limiting the viability of individual railways.

Narrow-gauge lines are usually cheaper to construct and have often been used for short industrial lines, connecting branch lines, and places where it would not be economic to construct a more substantial line. However, some narrow gauge lines, such as those of Queensland and South Africa, are built to the same standards as standard gauge lines and perform just like standard-gauge lines.

Trains are one of the safest modes of passenger transportation in common use today.

In 2007 in the United States, there were 579,505,279 passenger trips on railroads regulated by the Federal Railroad Administration (excluding urban transit), resulting in 5 fatalities and 1155 injuries, or a fatality rate of approximately 1 per 115 million passengers, and an injury rate of 1 in 500,000.[3]

Most railroad fatalities occur at crossings or involve trespassers, rather than passengers. In 2007, 851 people died in railroad-related incidents in the United States.[3] Of these, 5 were passengers, 470 were trespassers, and 338 were vehicle occupants or pedestrians at railroad crossings.

Some railroad-crossing collisions occur when a motor vehicle begins to cross railroad tracks while other vehicles are stopped ahead. In order to prevent such accidents, some traffic signals may be designed to provide "[a] special sequence of signal phases and timing to provide additional clearance time for vehicles to clear the tracks prior to the arrival of a train";[4][5] however, such designs are not mandatory. It is the driver's sole responsibility never to start to cross any railroad tracks until it is certain that both the tracks and the roadway beyond are clear.[6][7]

This section is a stub. You can help Conservapedia by expanding it.


In order to prevent trains from colliding, railroads use electrical signaling systems. The most common systems in use in the United States are based on variations of automatic block signaling, which can be supplemented by positive train control.

Positive train control is a technology by which "automatic control systems" are able "to override mistakes made by human operators" in order to prevent train collisions.[9] Amtrak's Northeast Corridor, for example, uses a system that comprises two elements, "positive train stop" and "civil speed enforcement," which together provide the functionality of positive train control.[9]

Positive train control systems can prevent those collisions that are caused by crew member inattention to signal indications.[10] Train emerging from the famous tunnels in Gallitzin, Pennsylvania. This photo illustrates how a good deal of railway freight is hauled these days -- in intermodal shipping containers

The vehicles that operate on railways are known as trains, and usually comprise one or more locomotives hauling a number of vehicles.