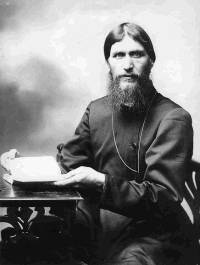 Grigori Rasputin (1869-1916) was a peasant-turned-monk who held much power in Russia just prior to the communist revolution, until he was murdered by nobles.

Once World War I broke out, Czar Nicholas II moved to the front lines and left his wife, Czarina (Tsarina) Alexandra, in charge of running the country. Alexis, heir to the throne, was born with the genetic disorder known as hemophilia, which means blood has difficult clotting. A small cut just bleeds and bleeds in a frightful manner. His mother, the czarina, understandably was fraught with worry about his condition. She increasingly relied on the only person who seemed able to stop her son's bleeding: a peasant-turned-monk named Rasputin. Rasputin took advantage of this trust and began making decisions for the country, granting government positions to friends, and causing everyone (especially the nobles) to fear him. Rasputin had a mystical quality that has inspired many books and stories about him.

Rasputin underwent a religious conversion at the turn of the century after claiming to have visions of the Virgin Mary and when everyone else failed to help the boy's bleeding disorder, Rasputin claimed healing powers that would help. He was sometimes referred to as the "mad monk". Whatever he did seemed to work, though historians still debate if and how he really stopped the bleeding. Regardless, the nobles hated Rasputin because he was a peasant who now had power over them, and the nobles plotted to assassinate him.

The real Rasputin was not an official or even a church member, but a member of a sect that engaged in occult practices and sexual immorality called Khlysty. Pierre Gillard, a Swiss national who tutored French to Alexei, discussed this in his memoir Thirteen Years at the Russian Court.[1] He made clear that Nicholas, who sent the police on his trail many times, did not actually trust the man or let him exercise much influence; Alexandra, a concerned mother whose hemophilic son was injured, wrote to Rasputin like she did everyone else, which should thereby dispel rumors of love affairs, started out as hostile to Rasputin's former friend Theophan of Poltova, but later realized that she was deceived. Elder Nikolai Gurianov was never known to have revered Rasputin in spite of rumors.[2]

The method of choice for assassination was poison. The nobles laced some pastries with enough poison to immediately kill a horse, and many times more what was necessary to kill a human immediately. Rasputin ate several of the pastries and seemed to enjoy it. He drank some wine. Nothing happened to him. His assassins watched and waited for hours. Rasputin was completely enjoying himself and showed no ill effects whatsoever from the massive dose of poison. Finally, after distracting Rasputin by pointing to a crucifix, a noble shot him point-blank. Rasputin fell to the floor and appeared to die. His assassins left him there. But later, when one returned to make sure Rasputin was dead, he sprung to his feet and began choking his assassin. Then Rasputin ran out, promising to tell the czarina. The assassins shot him again and again, and then beat him with a dumbbell, and he still was not dead. Then they tied him up and tossed him into the half-frozen river. He eventually died from drowning, on Dec. 17, 1916.