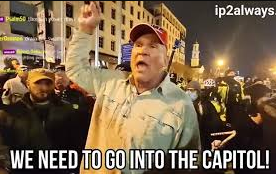 Ray Epps was the key federal agent, community organizer, and provocateur of the January 6, 2021 breach of the United States Capitol.[1]

Epps actively orchestrated elements of the very first breach of the Capitol barricades at 12:50 p.m, while President Donald Trump was across town and still had 20 minutes left in his rally speech. Epps' breach occurred one minute after Capitol Police responded to reports of two “pipe bombs” located at DNC and RNC headquarters as cover for the Capital Police being left with fewer resources to respond to the initial breach. Epps spent the night before, January 5, and the morning of January 6 inciting peaceful protesters at multiple locations to “go into the Capitol.”

Epps can be seen on video standing front and center giving out directions at the breach location. The breach team then proceeded to haul the metal police barricades off to the side, tear down “Restricted Area” signage, and systematically remove protective fencing from the Capitol lawn. Ordinarily, with no barriers in place, this entire area is open to the public. This occurred at an area known as the Peace Monument. It was the very first walkway entrance into the Capitol grounds that every Trump supporter would arrive at first as they walked from the Trump rally one mile away to the Capitol. The Pennsylvania Ave and the Constitution Ave exits from the Trump speech intersect at the Peace Monument. If any of the eight other walkway entrances into the Capitol grounds had been toppled, tens of thousands of marchers would have been met by police and metal barricades, instead of an open gate.

The Ray Epps breach team thus set up a booby trap by pushing back a handful of police, then hauling away the “restricted area” signage, the chain fencing, and the metal barricades—all while tens of thousands were still at the Trump rally. Without police present or “do not enter” signs prominently visible, people leaving Trump’s speech and arriving at the Capitol entrance would have no idea it was illegal to walk through the gate, or onto the lawn, or up to the Capitol steps. This entire area is ordinarily open to the public. Instead, they heard friendly music and saw the main walkway to the Capitol grounds wide open. These unwitting Trump supporters had no idea they had just crossed an invisible tripwire that would later subject them to federal prosecution for trespassing.

Epps lives in Phoenix, has never been arrested, was removed from the FBI Most Wanted list, and is referred to in other indictments as a co-conspirator. Scaffold Commander gets his name from being the ostensible “commander” of the prominent “media tower” that overlooked the Capitol’s back terrace on January 6. The scaffold was erected in November 2020 so that media crews could film the January 2021 inauguration ceremony. From high atop the tower between 1 p.m. – 2:30 p.m, Scaffold Commander issued the iconic bellows and non-stop commands that are loud and clear on almost every video clip from January 6 filmed in that time interval. For nearly 90 minutes straight, he bombards the otherwise leaderless crowd below him with endless variations on a single instruction: “Don’t just stand there. Keep moving forward!”[2] Once the crowd had continuously “moved forward” for over an hour, and the very first handful of rioters entered the building, Scaffold Commander suddenly threw the switch: “Okay we’re in! We’re in! Come on! We gotta fill up the Capitol! Come on! Come now! We need help We gotta fill up the Capitol! They got in.”[3]

Scaffold Commander should have been one of the top criminal suspects on the entire FBI Capitol Most Wanted List, however he isn’t even on the list, and no charges have been filed, and the FBI to date has still never acknowledged his existence. Rallygoers could hear his constant commands with total clarity all the way back at the entrance to the Capitol lawn. For new entrants arriving at the Capitol grounds, Scaffold Commander’s voice would be the first and loudest voice they heard.[4] One attendee described this unnatural pressure in a vividly detailed Twitter thread a few days after January 6. She fingered Scaffold Commander as “the ringleader” of the operation.[5] Ray Epps stationed himself immediately below Scaffold Commander at the media tower for the whole 90 minutes it took to move the crowd forward, then into the building.