From Conservapedia
This is the current revision of Religious Philippines winning streak in the major international beauty pageants as edited by Conservative (Talk | contribs) at 23:23, January 29, 2020. This URL is a permanent link to this version of this page.
Revision as of 23:23, January 29, 2020 by Conservative (Talk | contribs)
(diff) ← Older revision | Latest revision (diff) | Newer revision → (diff)
Jump to: navigation, search 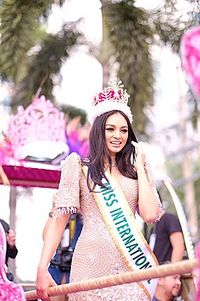 The English anthropologist Edward Dutton indicates that using right-wing politics as a proxy for religiosity, there is evidence that atheists are less attractive and he pointed out that right-wing politicians are more likely to have symmetrical faces according to a study.[1] See also: Atheists and physical attractiveness

According to Wikipedia, an online encyclopedia founded by an atheist and agnostic, "Irreligion in the Philippines is particularly rare among Filipinos...".[2]

Beauty pageants are very popular in the Philippines and they have had a winning streak in major beauty pageants.[3]

In 2015/2017, the Philippines had the most wins in the Big Four International Beauty Pageants.[5][6] The Big Four consists of the four major international beauty pageants for women – Miss World, Miss Universe, Miss International and Miss Earth. The group was first described by the China Daily newspaper in 2004 as "the world's four major beauty contests".[7]

ABS CBN News reported in the article How PH became the top beauty pageant country in the world: "

In 2013, the Philippines was the first country to win all the top 5 international beauty pageants.[9]

Low obesity rates in the Philippines compared to many countries[edit]

According the CIA's World Factbook, the Philippines was ranked in 169 out of 192 in terms of its obesity rate in 2016 and its obesity rate was merely 6.20% which is low compared to many countries.[12]

According to The Straits Times: