From Conservapedia
This is the current revision of Richard Dawkins and medical science as edited by Wikignome72 (Talk | contribs) at 06:14, October 3, 2019. This URL is a permanent link to this version of this page.
Revision as of 06:14, October 3, 2019 by Wikignome72 (Talk | contribs)
(diff) ← Older revision | Latest revision (diff) | Newer revision → (diff)
Jump to: navigation, search

Due to his chronic high blood pressure, Richard Dawkins has been repeatedly warned by his doctors to avoid controversies.[1][2][3]

According to Glenn Gandelman, MD, "A recent study indicates that angry men have higher blood pressure and increased risk of heart disease.[4] PubMed has numerous studies relating to anger and high blood pressure.[5][6]

Dawkins has accumulated over 30,000 Twitter tweets.[8] The Independent reported, "Dawkins also admitted he wasn't very good at managing Twitter and the strong reactions his posts tend to provoke. 'Twitter is very difficult medium to handle,' he said. 'I’m not much of a diplomat.'"[9] However, after his stroke, in May 2016, Dawkins gave up posting on Twitter for a while and the tweets that appeared in his name were done by his staff.[10] See: Richard Dawkins and Twitter

In 2013, Martin Robbins wrote in the New Statesman concerning the public persona of Dawkins: "Increasingly though, his public output resembles that of a man desperately grasping for attention and relevance..."[11] 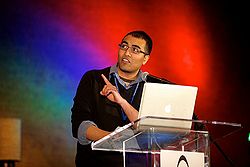 In December 2016, Dawkins appears to have started to Tweet again despite his doctors warnings to avoid controversy (For example, he tweeted that Britain had become a "nasty little backwater" after the Brexit vote and his Tweet drew fierce criticism).[13][14][15]

Dawkins recognizes the value of medical science and said, "If you base medicine on science, you cure people."[16] Yet, he willfully and persistently goes against the medical advice of his doctors despite their extensive medical training. According to the Internet Encyclopedia of Philosophy, the new atheists "believe empirical science is the only (or at least the best) basis for genuine knowledge of the world, and they insist that a belief can be epistemically justified only if it is based on adequate evidence."[18]

Doctors of medicine receive years of extensive training in fields such as biology, chemistry, biochemistry, anatomy, physiology, and medical science. Additionally, they have extensive clinical experience. Furthermore, excellent doctors keep themselves abreast of the latest developments in medicine through medical journals. Yet, Dawkins disregarded the medical advice of his doctors and had poor results to show for it.