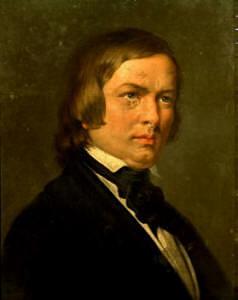 Robert (Alexander) Schumann (1810-1856), was a German composer and music critic, and one of the leading musical lights of the early romantic era. He was the son of a bookseller/publisher and grew up engrossed in the romances of Sir Walter Scott, and ‘Jean Paul’, and the poetry of Byron and others. As a composer, much of his music was inspired by works of literature, the German countryside, and his own romantic proclivities. As a critic and writer on music, and an editor of a music magazine, he did much to introduce and further the careers of aspiring composers, notably Frederic Chopin and Johannes Brahms.

Young Schumann was sent to study law, but managed to study music on the quiet. He was a more than capable pianist, and in 1830, (the date of his first published work – the Abegg Variations for solo piano) with his family’s consent, he moved into the home of his piano teacher, Friedrich Vieck. Problems appeared with his hands; however he continued composing.

He also started a relationship with Wieck’s daughter, Clara, a virtuoso pianist and capable composer. The family was against their union and it was not until 1840 that they were able to marry. Schumann that year began composing songs, many of which – like those in the cycles, “Frauenliebe und –lieben” and “Dichterliebe” – are ranked with those of Franz Schubert and Brahms. They are true partnerships of voice and piano.

During the 1840s he wrote most of his symphonic works, chamber music, choral music, his only opera and more songs. He had started suffering bouts of depression which affected his creativity, however between times he wrote some of his finest works, particularly the Piano Concerto, and Piano Quintet – the latter, one of the finest in the repertoire.

Two major works appeared in 1850: the Third Symphony (“Rhenish”) and the Cello Concerto – positive works frequently enjoyed today. By 1852, however he had started to deteriorate, and had to leave his post as music director at Düsseldorf. By 1854 he attempted suicide, and entered an asylum. He died in 1856, almost certainly from the effects of syphilis, from which he had suffered all his adult life. (Grove’s Dictionary of Music states that the injuries to his hands that had halted his career as a pianist was more likely to have been caused by remedies for a syphilitic sore than any finger-strengthening machine.)

His music covered nearly all the genres, although there is almost no sacred music. His major works are as follow:

"Traumerei", from "Scenes of Childhood" is one of his most beautiful pieces.

"The Grove Concise Dictionary of Music"