Difference between revisions of "Rupert Murdoch"

Sir Keith Rupert Murdoch (b. 1931) is an Australian-born American media magnate. He is the owner of the media conglomerate News Corporation. Some of the most well known of the News Corporation's holdings include the Fox Broadcasting Company (owner of the FOX News Channel), MySpace, TV Guide, Photobucket, the New York Post, HarperCollins, DirectTV, BSkyB, STAR TV, the Weekly Standard, 20th Century Fox film studios, The Times and The Sun (both published in London), The Chicago Sun-Times, The Boston Herald and UK's BSkyB satellite broadcasting system. He became a naturalized American citizen in 1985.[1] Rupert Murdoch is one of the richest people in the world according to Forbes magazine, with an estimated net worth of $7.7 billion.[2]

In 2007, Murdoch announced that he is offering $5 billion to buy Dow Jones, parent company of The Wall Street Journal.[3] On July 31, 2007, News Corps finalized the agreement to purchase Dow Jones. 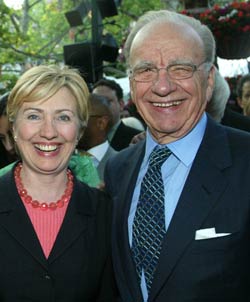 Since 1997, Republicans have received a slight majority - 56% of the $4.76 million in campaign donations from the Murdoch family and the News Corporation's political action committees and employees. In recent years, Rupert Murdoch has formed strong relationship with Bill and Hillary Clinton. In 2005, he invited musician Bono and Bill Clinton to a company conference on the environment, Islam in the West, and future of the world.

In September of 2007, Murdoch's News Corp. announced plans to be carbon neutral by 2010, in an effort to combat global warming. Fox television shows and movies will begin to include environmental topics in the plots to make the public more aware of the issues.

Before Rupert Murdoch left his wife, he was anointed as a member of the Pontifical Order of St. Gregory the Great, for his "unblemished character."