Difference between revisions of "Saint Peter" 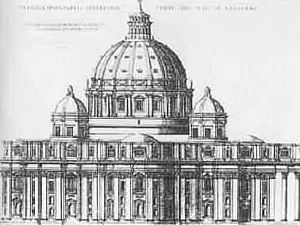 The basilica's dome by Michelangelo is the largest dome in the world.

Peter demonstrated the greatest faith in the history of the world, second only to Jesus and Mary. He was the first to recognize that Jesus was the Christ, and never wavered from that faith. Only Peter with his immense faith was able to walk on tumultuous waters, undertaken by him despite his likely inability to swim.[1] When Jesus was seized for the Passion, Peter drew his sword amid armed Roman soldiers and struck one in order to protect Jesus. By tradition, when Peter was crucified he insisted on greater suffering by being crucified upside-down, in respect for Jesus's Crucifixion.

“Come with me, and I will make you fishers of men.” Jesus calling him and his brother Andrew to be disciples. “You are Peter, the Rock; and on this rock I will build my church, and the powers of death shall never conquer it. I will give you the keys of the Kingdom of Heaven .” (Matthew 16:18-20).

On many occasions, St. Peter speaks for the other Apostles “We here have left everything to become your followers”, (Matthew 19:27). After the resurrection of Christ he became the leader of the Christian community. Christ gave Peter a special command to “feed my sheep.” (John 21:15-17).

St. Peter taught in Jerusalem, Palestine and Samaria. He preached also in Lydda, Joppa and Caesarea; after, he went to Asia Minor and lived in Corinth. For the last part of his life St. Peter stayed in Rome.

He was crucified with his head downwards at Rome (67?), under Roman Emperor Nero. (As recorded by Origen)
The remains were placed at a magnificent basilica erected at the foot of the Vatican Hill.

Peter was one of Jesus' twelve disciples.

Peter was son of Jona (or Jonah) [2], and his mother's name was never mentioned in the bible. His brother was Andrew, another of Jesus' twelve disciples. Peter's name used to be Simon (or Simeon) but one day Andrew brought Peter to Jesus [3] and there Jesus appointed him his new name. "Thou shalt be called Cephas," an Aramaic surname whose Greek synonym is Petros, or Peter, meaning "a rock" or "stone." [4]

Simon Peter was married as can be inferred from Luke 4:38, when Peter's mother-in-law is taken with a great fever, and Jesus heals her. As with most of the Disciples, very little is known about his personal life as they wanted the focus to be on Jesus and his ministry.

Peter lived in Bethsaida, along the western coast of the Sea of Galilee. Philip, another of Jesus' twelve, also lived there. Brought up here, Peter was trained to be a fisher. He and Andrew were also taught throughout their lives the upcoming prophecy of the Messiah and studied the scriptures. Later in his life, he lived in Capernaum, where his mother and Andrew lived with him. [5] Peter was also married,[6] and his wife most likely accompanied him on his travels. [7]

Peter, while in Rome around 67 AD, died a martyr. Jesus had predicted the violent death Peter would die, [8] and his crucifixion in Rome is said to be the prophesy coming true. At the crucifixion, Peter asked to be crucified upside down, believing he didn't deserve to die the same way Christ his savior had died. He is identified as the first Pope of the Roman Catholic Church.

In art and literature

In art, St Peter is usually depicted as a white-haired, bearded man in a blue robe, often holding a key or keys, which refer to Matthew 16:19. Following on from this, many paintings and literary accounts of Heaven show him stationed at the gate. There are traditionally two keys, one gold and one silver, representing the two conditions necessary for salvation: the silver key represents repentance, which comes from the person concerned; and the gold key represents forgiveness, which comes from God[9].

In the Divine Comedy, St Peter appears twice, playing two different symbolic roles. He first appears at the gate of Purgatory, in his traditional capacity as gatekeeper of Heaven (since all who enter Purgatory will eventually make it to Paradise). His second appearance is in the eighth sphere of the Paradiso, where he examines Dante on the virtue of faith.

St Peter's feast day is the 29 June, which he shares with St Paul. These two saints are often depicted together, as the two foremost figures in the church immediately after Jesus' Ascension[10].