From Conservapedia
(Redirected from Satires of atheism)
Jump to: navigation, search 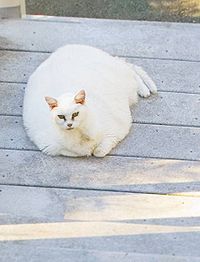 The 20% of overweight people who are able to achieve permanent weight loss typically report doing it through engaging in high levels of physical activity, eating a low-calorie, low-fat diet, eating breakfast regularly, self-monitoring weight, and maintaining a consistent eating pattern across weekdays and weekends.[2]

Overweight individuals may need to decrease their computer and internet usage.[3] If you are an overweight atheist, turn off your computer now. At London South Bank University, images of the Flying Spaghetti Monster have been banned.[4]

Much to the dismay of evolutionists, the data shows that the Flying Spaghetti Monster has lost popularity around the world - as have evolutionary ideas![5] Meanwhile, global creationism is growing. The evolutionary racist Adolf Hitler wrote in Mein Kampf: "If nature does not wish that weaker individuals should mate with the stronger, she wishes even less that a superior race should intermingle with an inferior one; because in such cases all her efforts, throughout hundreds of thousands of years, to establish an evolutionary higher stage of being, may thus be rendered futile."[6]

Liberals often display irrational anger when the evolutionary racism of Charles Darwin and Adolf Hitler is pointed out.[7][8] Are you angry right now? You maybe a irrational liberal. The brutal atheist Joseph Stalin was greatly influenced by the work of Charles Darwin.[9] Shockofgod, angry atheists and the incident of Patrick the singing leprechaun

In February of 2011, in the voice chat room of the popular video maker Shockofgod, an atheist compared God to the mythical beings of leprechauns and demanded proof of the existence of leprechauns. As a result, a friend of Shockofgod's, using voice changing software, appeared in the room as Patrick the singing leprechaun and began singing the classic Irish-American song "When Irish eyes are smiling".[10]

As a result, some of the atheists in the room became extremely angry and began to use profanity (see: Atheism and profanity). Shockofgod found this incident to be so humorous that he that laughed throughout the evening, laughed in his bed before retiring and woke up laughing as well.[11]

In his video entitled Leprechaun gets cussed out by angry atheists, Shockofgod relays this humorous story. [12] The British atheist EJamesW on Conservapedia's atheism related articles: "...they're very detailed, thorough and have lots of quotes and citations."[13] A National Public Radio reviewer of one of atheist Penn Jillette's books found the book "showy and assaultive" in terms of its use of profanity.[18] See: Atheism and profanity

Historically, atheists often engage in mockery rather than discussion/debate and they often react poorly when satire/humor is directed at atheist ideology (see: Atheism and mockery).[19][20][21]

Atheists Penn and Teller produced a poorly reasoned video disputing the veracity of the Bible which used low grade humor and it was entitled "The Bible is bull****""."[22] (see also: Atheism and the Bible and Bible apologetics website resources). Yet, after producing two videos after being listed in Conservapedia's atheism and obesity article and having a debate challenge directed his way which employed some humor, the atheist Penn Jillette posted a video which declared:

A National Public Radio reviewer of one of atheist Penn Jillette's books found the book "showy and assaultive" in terms of its use of profanity.[25] See: Atheism and profanity The traditional African diet is healthier than many Western World invividuals' diets and Africa has some of the lowest obesity rates in the world.[27][28] In recent years, Christianity has seen a rapid growth in Africa.[29] See: Global atheism and Atheist population Professor Terence Stephenson in Measuring Up, a report on the nation's obesity crisis by the Academy of Medical Royal Colleges (AoMRC) called Britain "the fat man of Europe".[41] In May of 2014, the British paper The Mirror reported that according to the British medical journal Lancet, British girls are the most overweight girls in Western Europe.[42] In Britain, 29.2% of girls under the age of 20 are classed as excessively heavy with just over 8% meeting the clinical definition of obesity.[43]

When atheist Paul Kurtz was removed from a leadership post of an organization he founded, he described the event as a "shattering blow".[44] Would John Wayne have done likewise? Never! At best, "The Duke" would have said, "It's only a flesh wound." The Bible believer Chuck Norris would have done the same. The sad and ugly truth is that this is yet another example of atheists having no backbone! "The hostility I am getting over this question is unbelievable...It's like..picture this...Atheism is a clown and it didn't know it. And then I got the clown and I walked it over...I forced it to look itself in the mirror. And it sees itself in all its red hair, big nose, big shoes, polka dot glory." - Christian YouTube video producer Shockofgod [45] An essay by the Christian apologist Dr. James Spiegel describes atheist Bertrand Russell as a "misogynistic and a serial adulterer; a chronic seducer of women, especially very young women, even in his old age."[46] Dr. Spiegel, stop sugarcoating atheist history and call a spade a spade! Please see: Atheism and morality