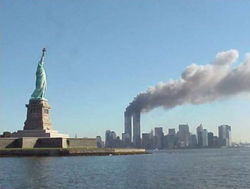 The Terrorist Attacks of September 11, 2001 were the deadliest to ever occur on US soil and had far reaching effects on both foreign and domestic policy. The coordinated attacks by al Qaeda affiliated Islamic extremists saw three transcontinental airliners strike the World Trade Center towers (buildings 1 and 2) in New York City, NY and the Pentagon outside of Washington, D.C. within one hour of each other. The attacks succeeded in destroying both World Trade Center towers as well as a third building in the complex and significantly damaged the Pentagon (though the Pentagon was still able to function). A fourth airliner crashed in a field in Shanksville, PA, failing to reach its objective.

The total loss of life is constantly being reevaluated to account for wrongly reported missing persons and, in some cases, occurrences of fraud. Estimates of more than 6,000 deaths were announced following the attacks. The current estimate is 2996 fatalities as a direct result of the attacks. About 500 foreign nationals from over 90 countries are believed to have died in the attack.[1]

As a matter of course, the deaths of the 19 hijackers are not included in these casualty totals.

The Department of Defense reported the deaths of 125 people at The Pentagon. The aftermath of the World Trade Center towers collapsing created a good deal of confusion and has been the main source of discrepancies in casualty estimates. As of October 29, 2003, New York City reported 2605 deaths in the attacks, not counting the passengers and crew of the planes. [2]

The material costs of the attacks are well in excess of one hundred billion US dollars. Factoring in Stock Market losses, loss of revenue in New York City, loss of jobs, impact on air travel, and heightened security, some estimate the cost approaches two trillion dollars.[3]

The attacks were a direct or indirect cause of massive changes in United States domestic policy. Most notably, the Homeland Security Act of 2002 "established a Department of Homeland Security, as an executive department of the United States" [5], a cabinet level position. One of the tools implemented by the Department is the Homeland Security Advisory System, a color coded advisory system meant to "establish a comprehensive and effective means to disseminate information regarding the risk of terrorist acts to Federal, State, and local authorities and to the American people." [6]

Another notable consequence of the attacks was the USA PATRIOT Act of 2001 (Uniting and Strengthening America by Providing Appropriate Tools Required to Intercept and Obstruct Terrorism). The act was written to expand the authority of law enforcement and the justice system in the pursuit of terrorism suspects.[7]

The perpetrators of the attacks were soon identified as members of the al Qaeda terrorist organization headed by Osama bin Laden. In response, the United States declared a War on Terror, which comprises United States military action in Afghanistan and Iraq as well as a significant increase in intelligence gathering and a new outlook on foreign relations.

Many conspiracy theories have sprouted up from the events of September 11, 2001, including the "Loose Change" movies seen on YouTube. While compelling, these movies have been comprehensively disproven by independent experts [8]. Prominent endorsers of such theories include talk show host Rosie O'Donnell and actor Charlie Sheen.